Mountain House Monday: An Update on the Dining Banquette + Ask the Audience 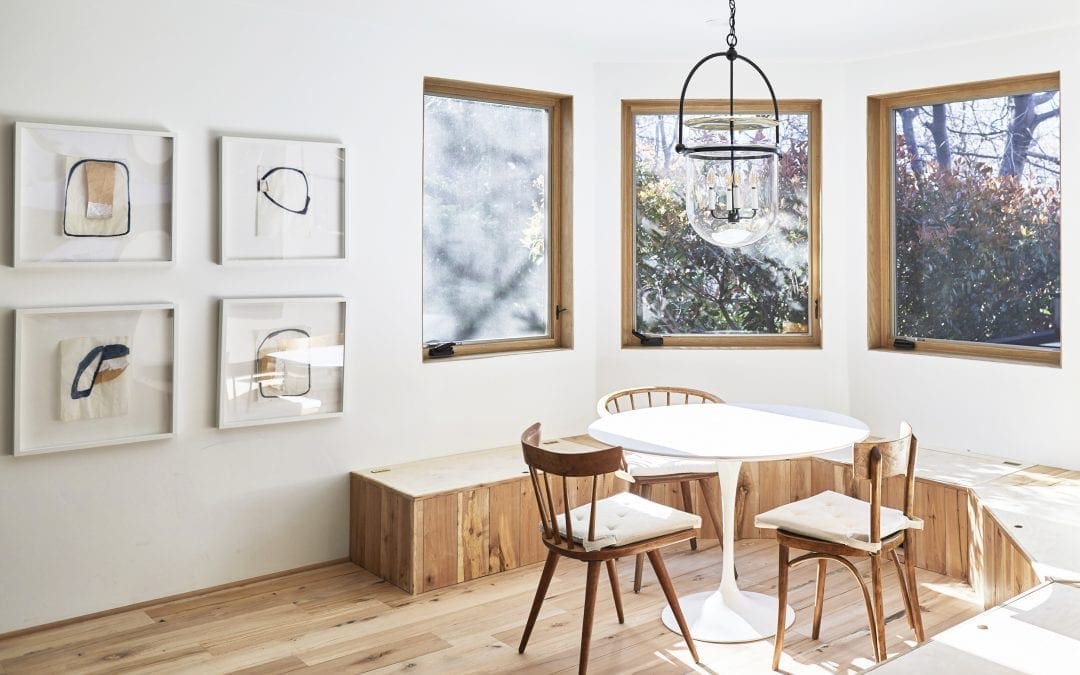 My dreams of having the world’s most comfortable dining banquette are coming true. After thinking that we needed to “use the space properly” with the dining table floating in what is obviously the dining area, we realized that we really just want to be sitting by the window on basically a sectional sofa. This nook will get so much conversational use, in addition to the typical “eating” that it’s worth changing it all up.

Here’s how it was: 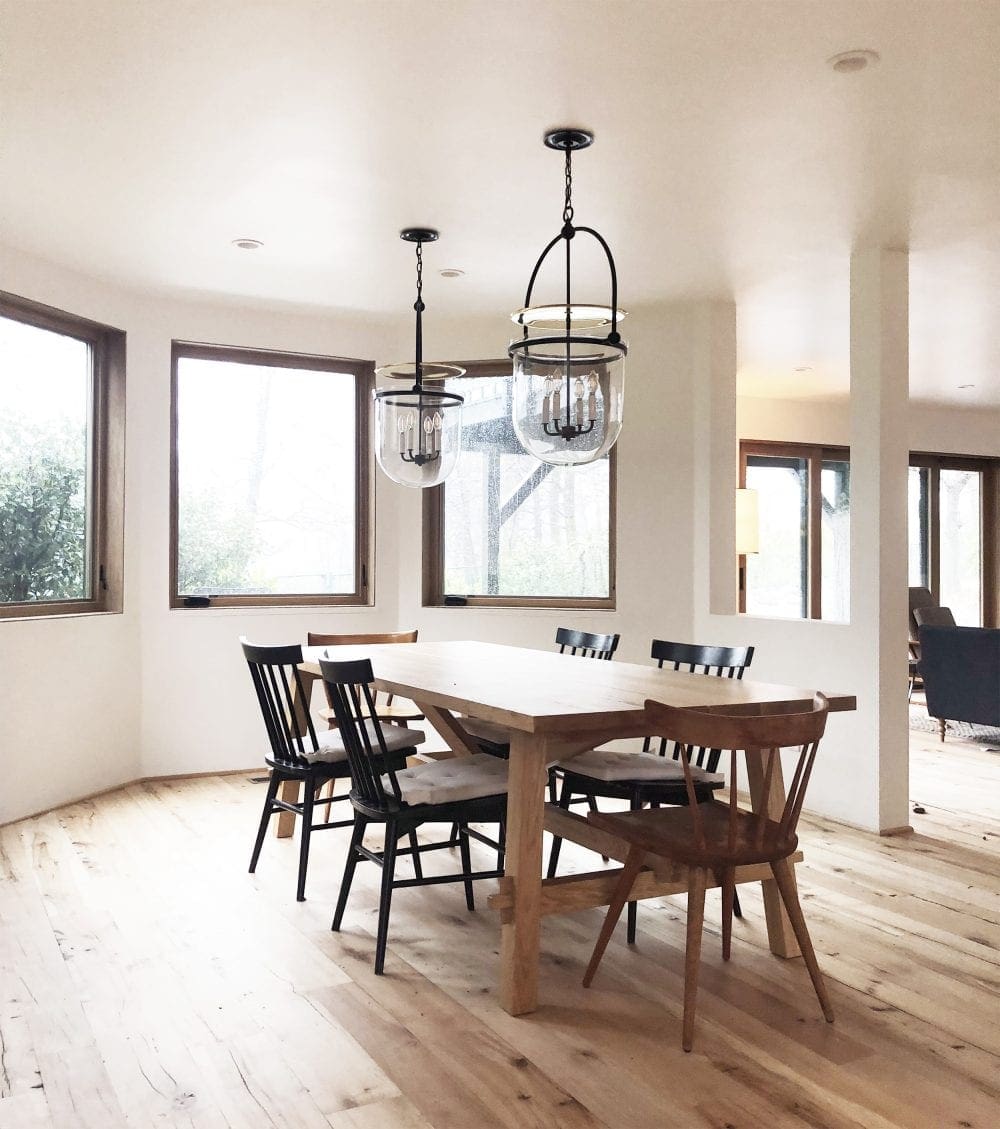 We put that dining table outside now, and we brought in the obviously too-small Tulip table while our custom table is made by Ross Alan Reclaimed Lumber.

But the question is about the cushions:

What style of cushion? Do we have a back cushion? Which fabric? Leather? Vinyl? Poly-linen? Do we have piping? Do we do something hip and cool (okay grandma) or something simple with more flexibility?

So let’s check out what we are working with here: 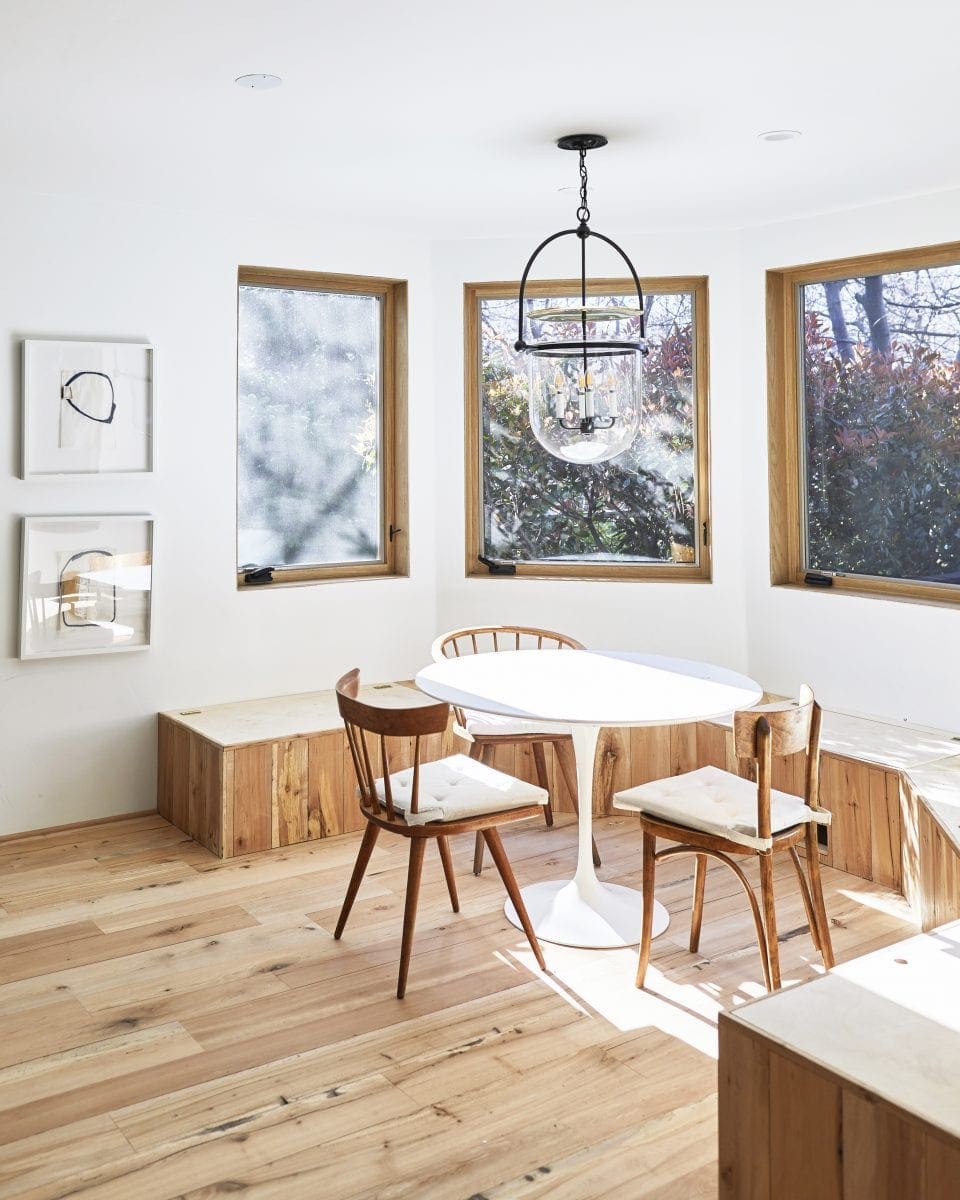 First off, the base and the table will both be built by Ross Alan, experts of the most wonderful reclaimed wood in LA, possibly the world (they did all that gorgeous wood you saw in the kitchen reveal from a few weeks back). In continuing with our seamless look, we basically designed the built-in seat to be continuous from the floor, in the same wood. 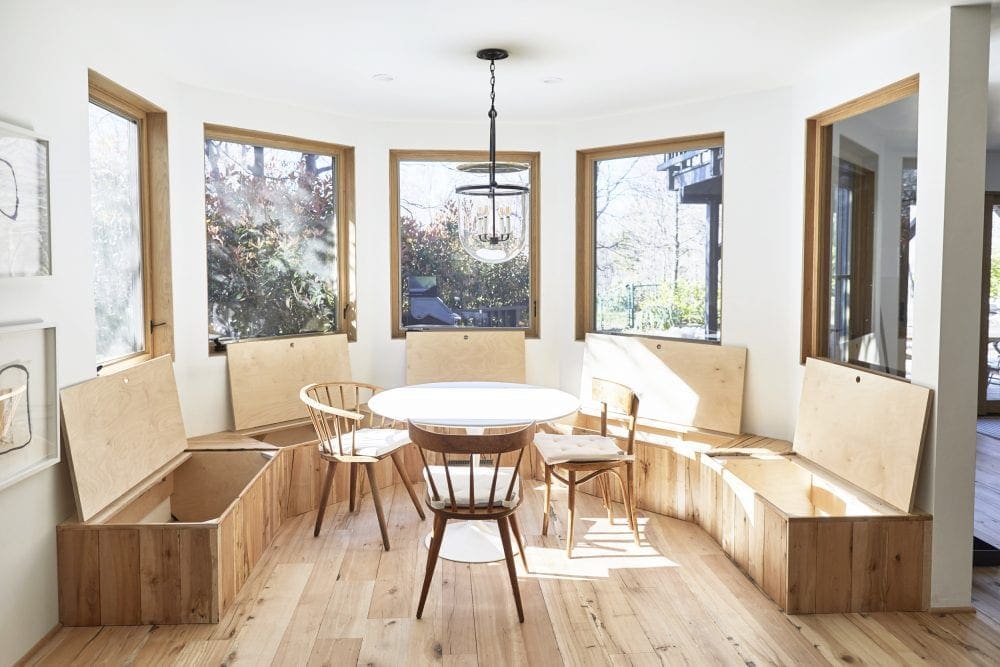 We have flip-top storage for seasonal things or boring things like extra cleaning supplies, but for now, the kids are hiding in them which I can’t blame them. We don’t really need the storage but seems crazy to not have the option. 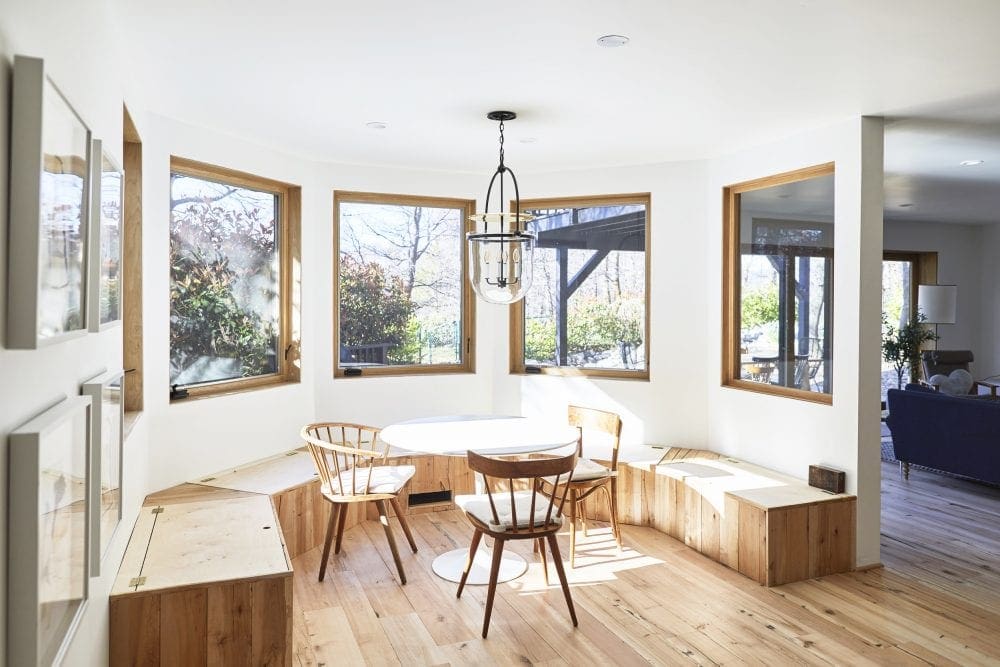 If you are worried about the person in the middle, against the window, who will be trapped by 3-4 people, don’t be—we will choose only those with the largest bladders or willingness to crawl under the table without complaining. Listen, we know that this is going to be annoying for some people the few times that we have a large group, but we are choosing this anyway. The cozy, comfort is worth it to us on a day-to-day basis. It’s like how we chose a wall of windows versus the typical work triangle in the kitchen, it’s all about what you value and by the way, that is also not annoying at all and was totally worth the two more steps I have to take to get ingredients. 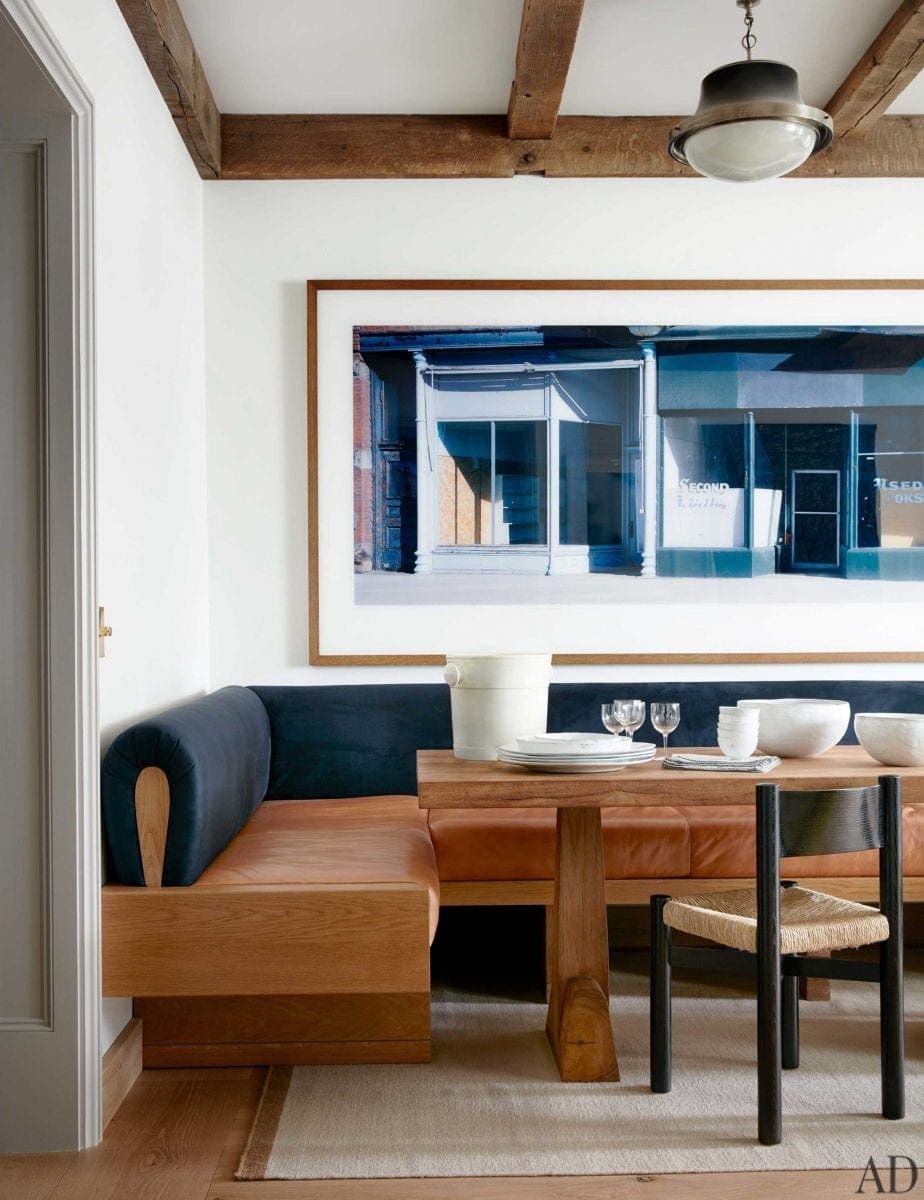 How awesome is that? But frankly I don’t know how to do that, nor do I think it’s necessarily right for the space but the idea is that I really WANT to do something amazing. One thing that I’m realizing is making the above slightly cooler is that the cushion isn’t exposed on the side – wood is covering it. Now, we would have to add that because ours isn’t built like that, so it seems kinda unnecessary. I also like how there is no top seam. Interesting…

But that cushion is taking up extra space due to the design and while ours is 24″, I don’t want to give up 8″, to do something like that. Additionally, what I’m compelled by is the two-tone aspect of it, something that I tried to convince my friend of two weeks ago while we were up there with fabric swatches, but that was before we found this inspiration shot… 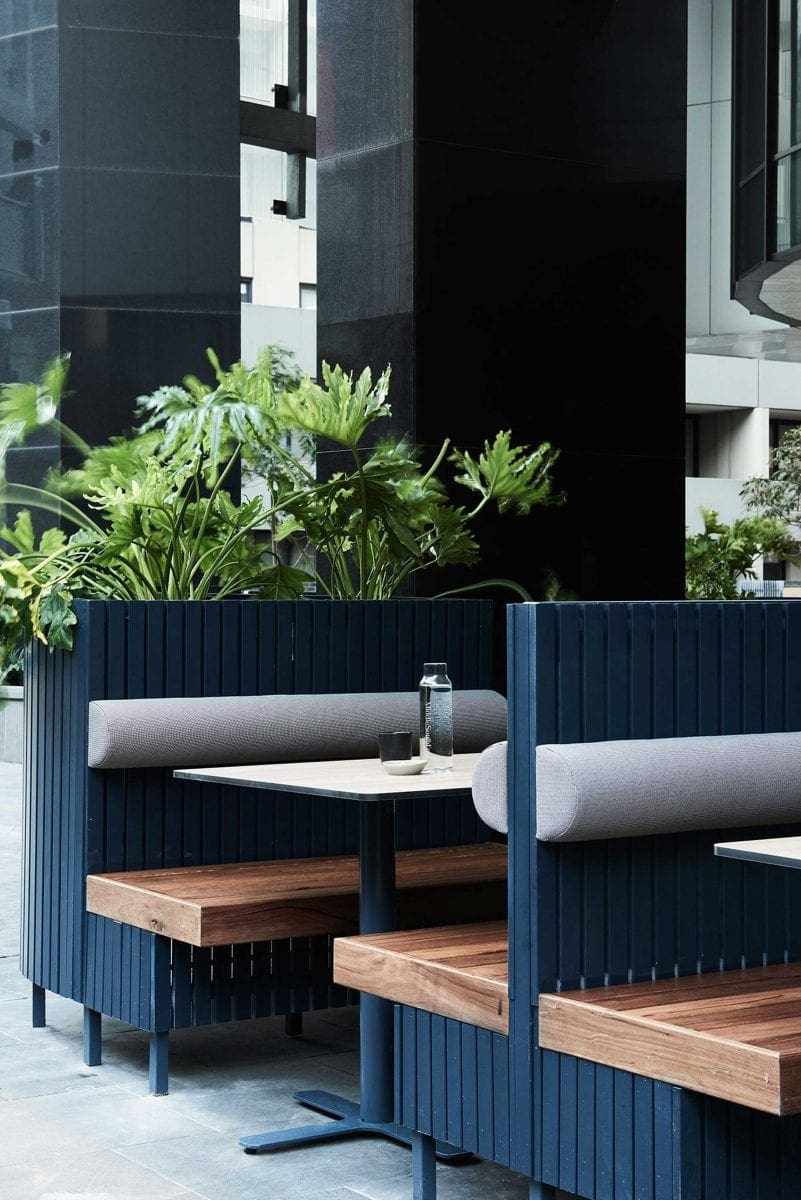 So cool, but lacking the comfort that I want. Now we did think about doing a larger version of this, with a wood frame or a double version of this and if you guys are like “YEAH DO THAT” I’ll reconsider. But it also might look silly and try-hard. It’s cool here because it contrasts so well against the dark wood and the chunky real wood bench. 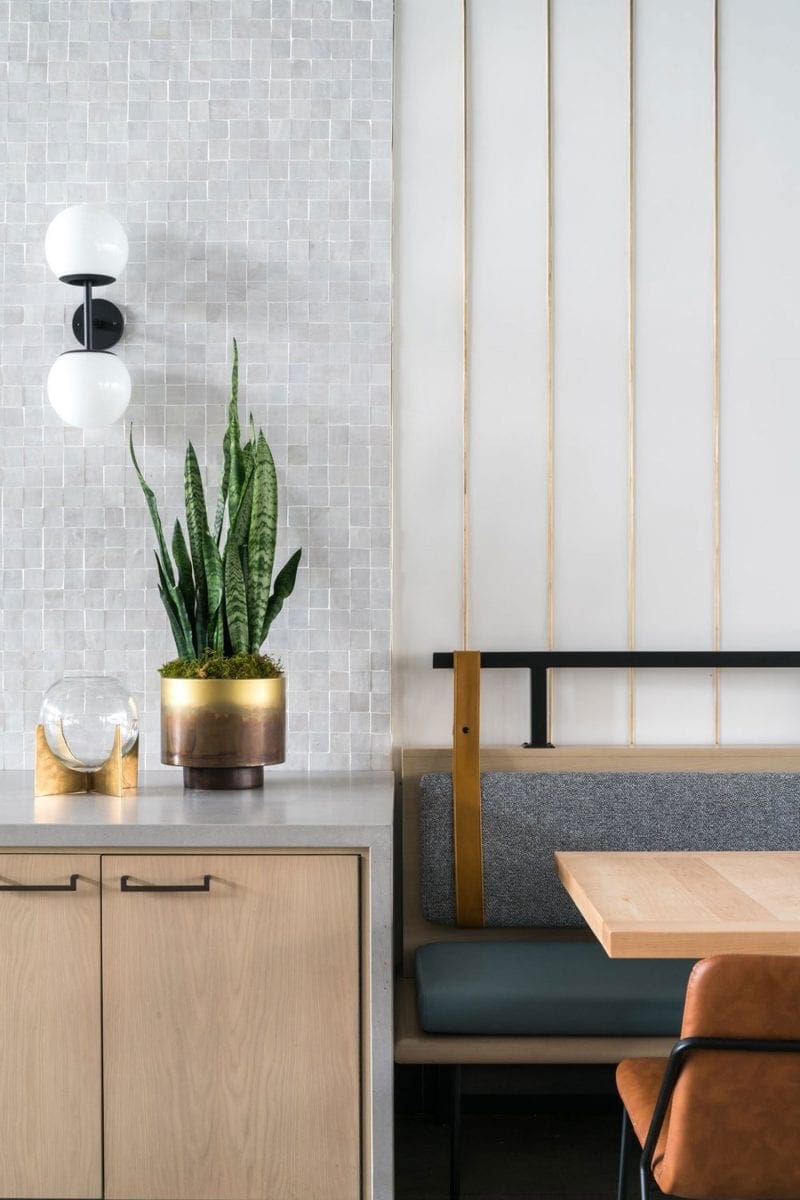 Now this trend is still huge, but due to the height of the windows we don’t have the space for it, nor do I think that designing a hanging back cushion is right this late in the game (I still really really like it, but it’s certainly been seen a lot lately so seems silly to start now). But I DO like that once again, no top seam!!!

You really have to stare and analyze photos to figure out what exactly you like about them. It’s not just the hanging back, it’s not just the two-tone, it’s the lack of seams and that the bench cushion is floating in a bit and not too chunky. 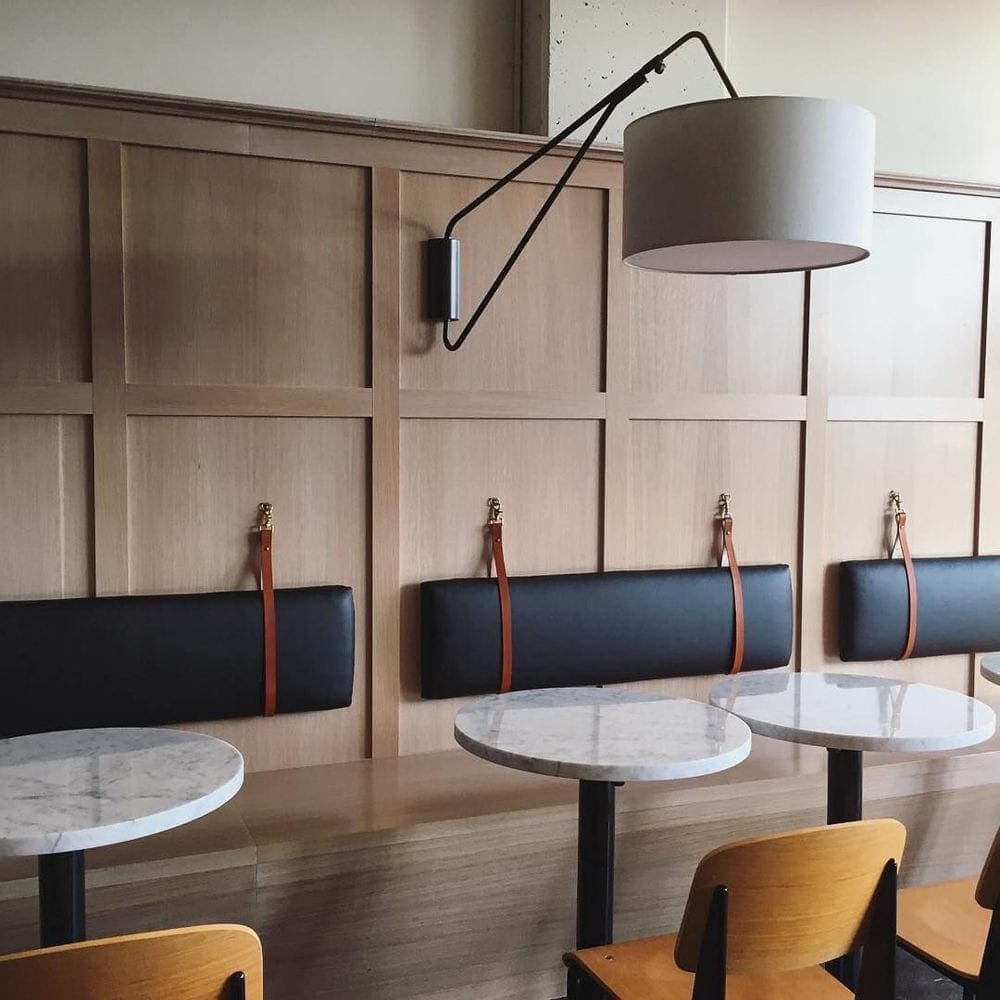 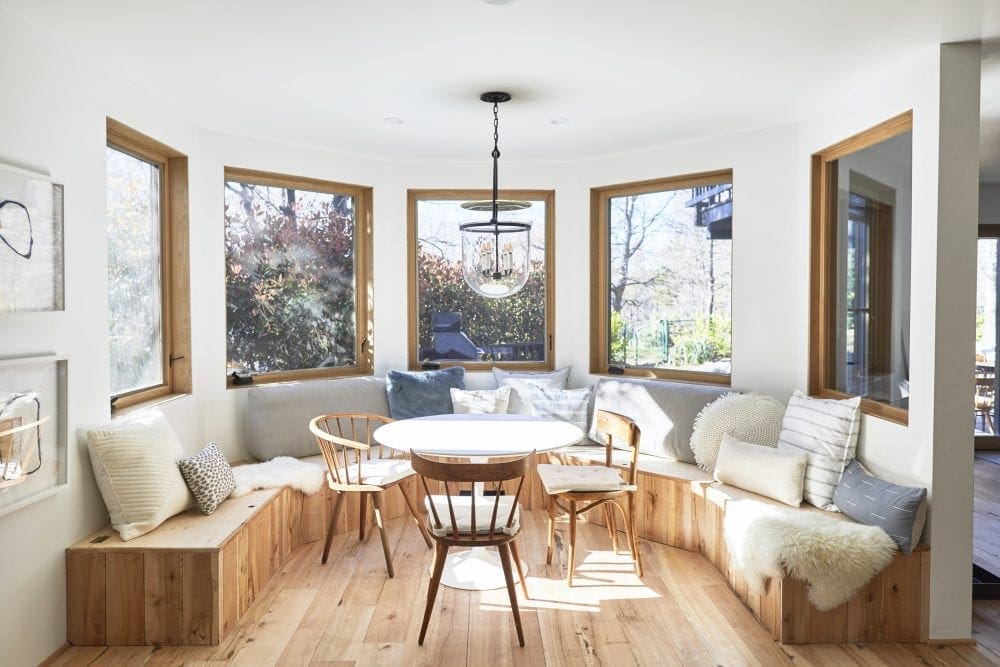 Let’s just say we forego the back cushion in favor of pillows. When we were up there, I threw a bunch down and it was so cozy and allowed for a lot of flexibility. 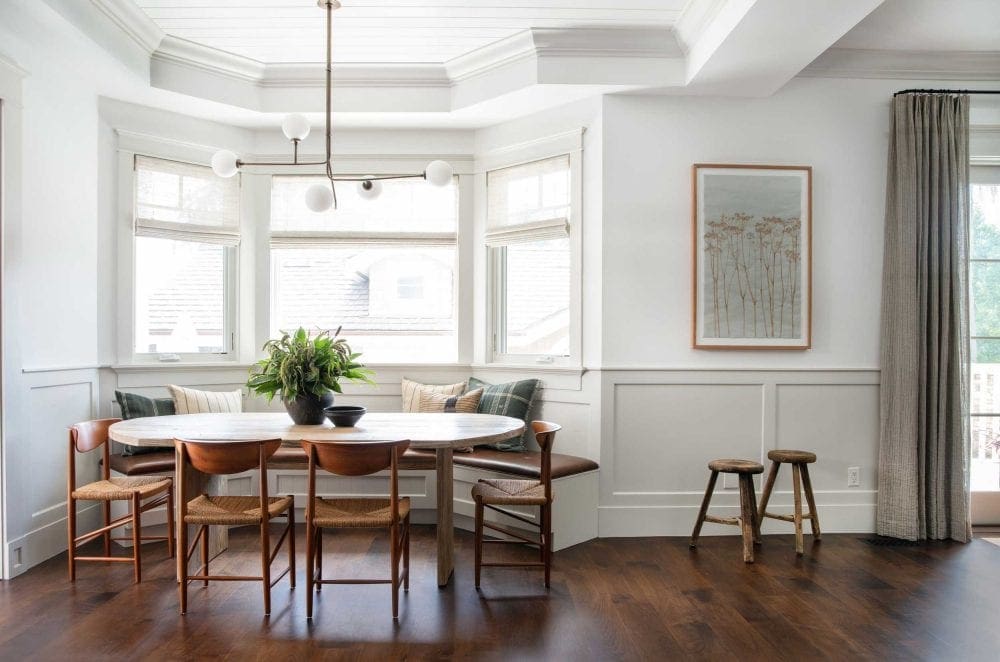 But am I as wowed by that idea? Not as much, but there is more opportunity for texture and pattern and styling and comfort. We made it deep enough that we can have large pillows to help anchor. 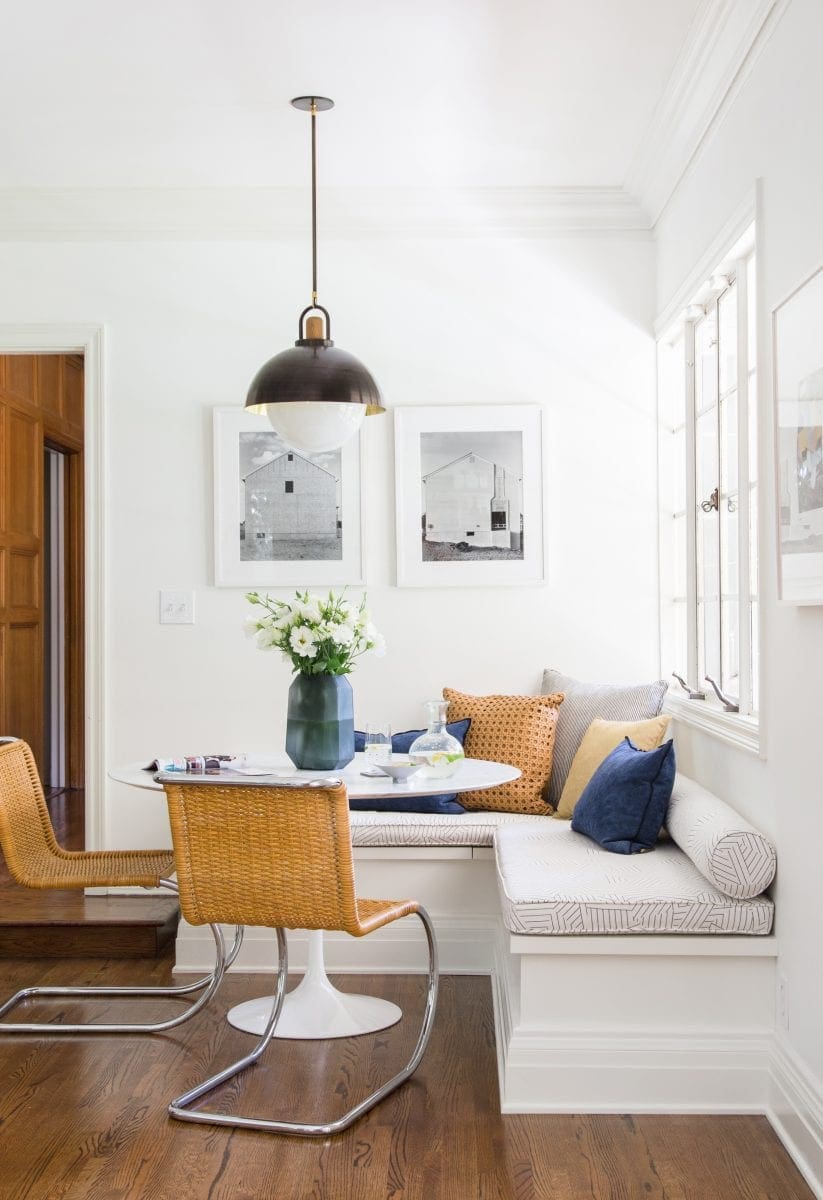 We could also do what we did in this Griffith Park house: a big bolster in the back and then layered on more pillows. We could even do a version of this that is a tapered triangle pillow that leans back but adds some support.

I LOVE the one below, but fear that if we tuft it like that, it’s not washable, but maybe it is? 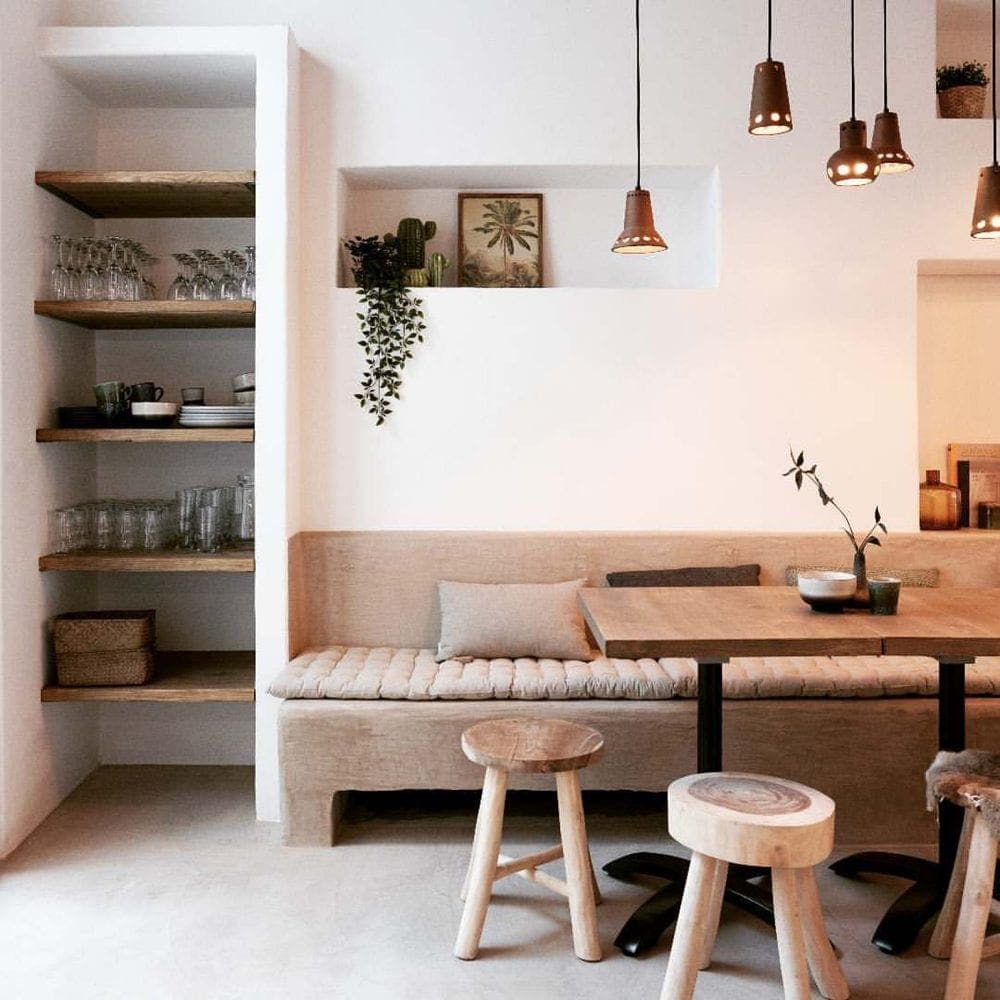 That’s my issue with the French mattress style, too—I want to be able to zip off and wash. 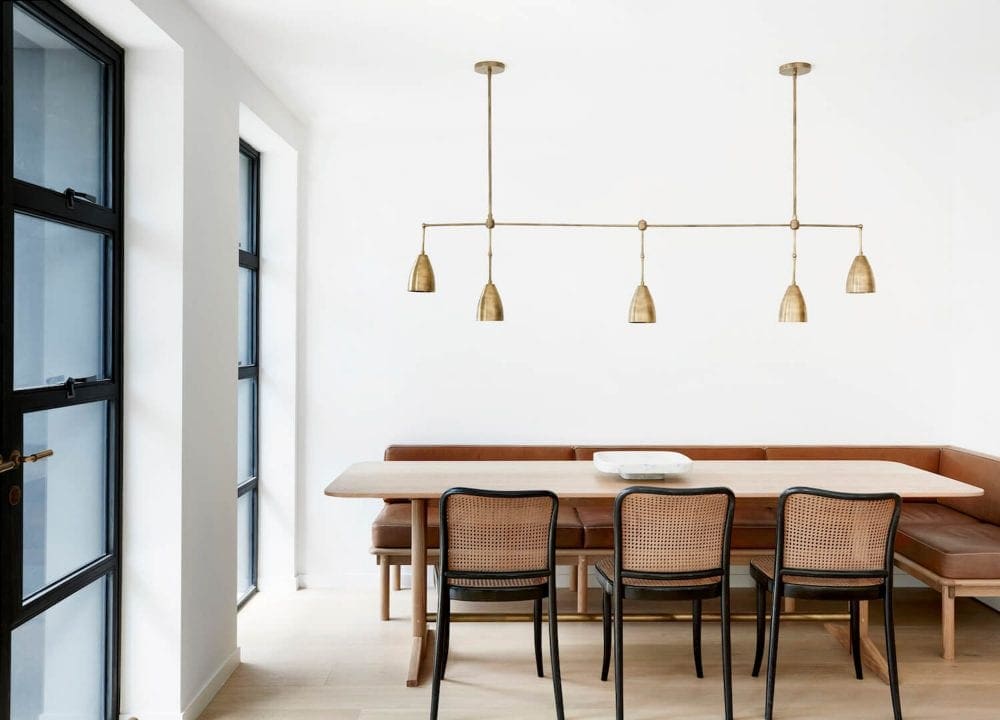 So let’s talk fabrics that we are thinking about:

Leather: We would need a lot of hides and I’d likely only fall in love with the most expensive leather out there. The pros of leather include durability but as my friend David (from MidcenturyLA) just disclosed to me, the pretty matte leather actually stains REALLY bad and any oil becomes a very noticeable stain. Yes, it will patina but it might take years. The leather that wipes up really clean is really shiny. ALSO, we don’t think we want dark. My initial idea was a forest green leather but Brian Henderson nixed that hard and fast saying “dining banquettes are already kitschy, so doing it in a green leather could look really dated.” I don’t necessarily agree, I think he needs better inspiration references, but I like when people take things OFF the table. Once I put all the light tones up there I realized that I do want it to be relatively light, and I just can’t picture a light leather. That sounds scary to me, but maybe a light gray? So right now unless I found the perfect leather that I can afford, we are leaning away from leather. 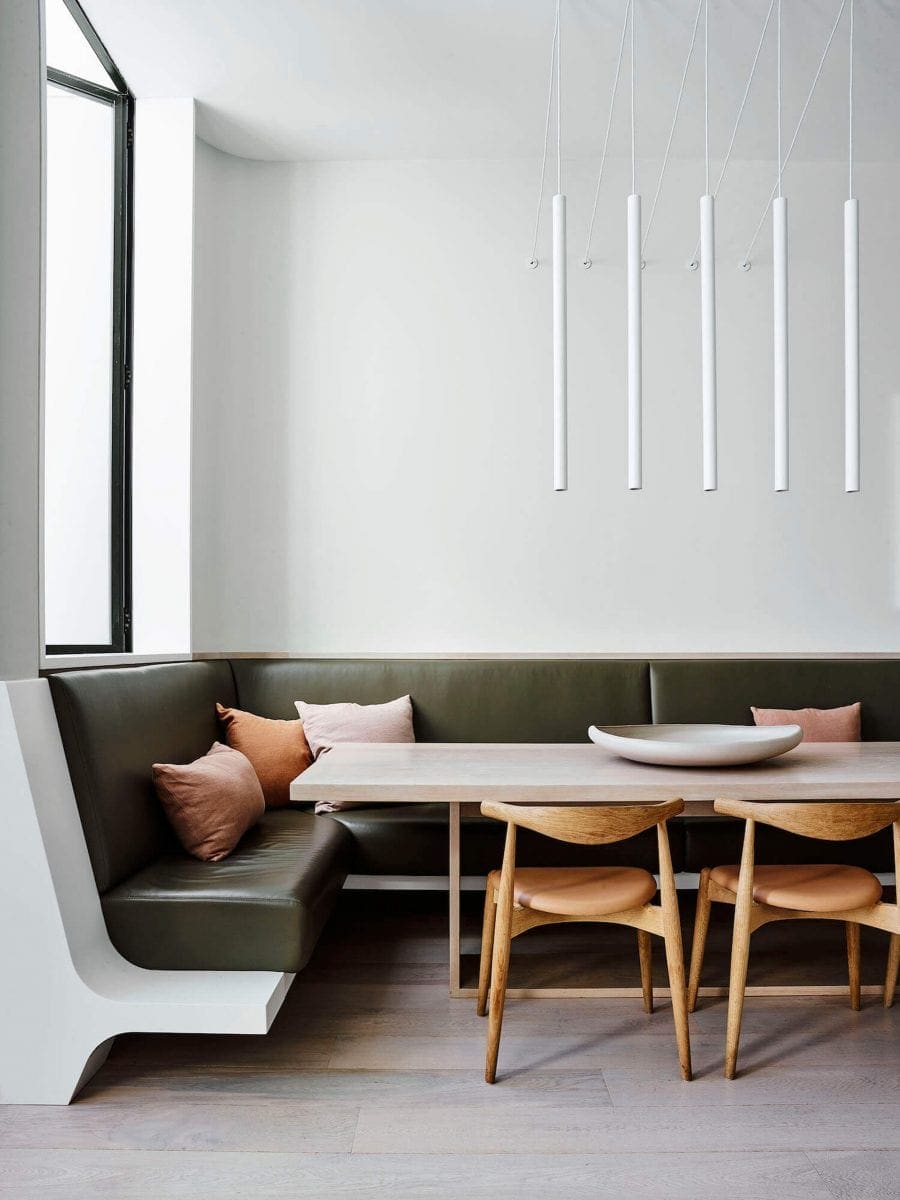 This is so pretty and even the light brown leather on the wood could be SO PRETTY. Oh no. I think I might have just convinced myself to at least shop for leather. 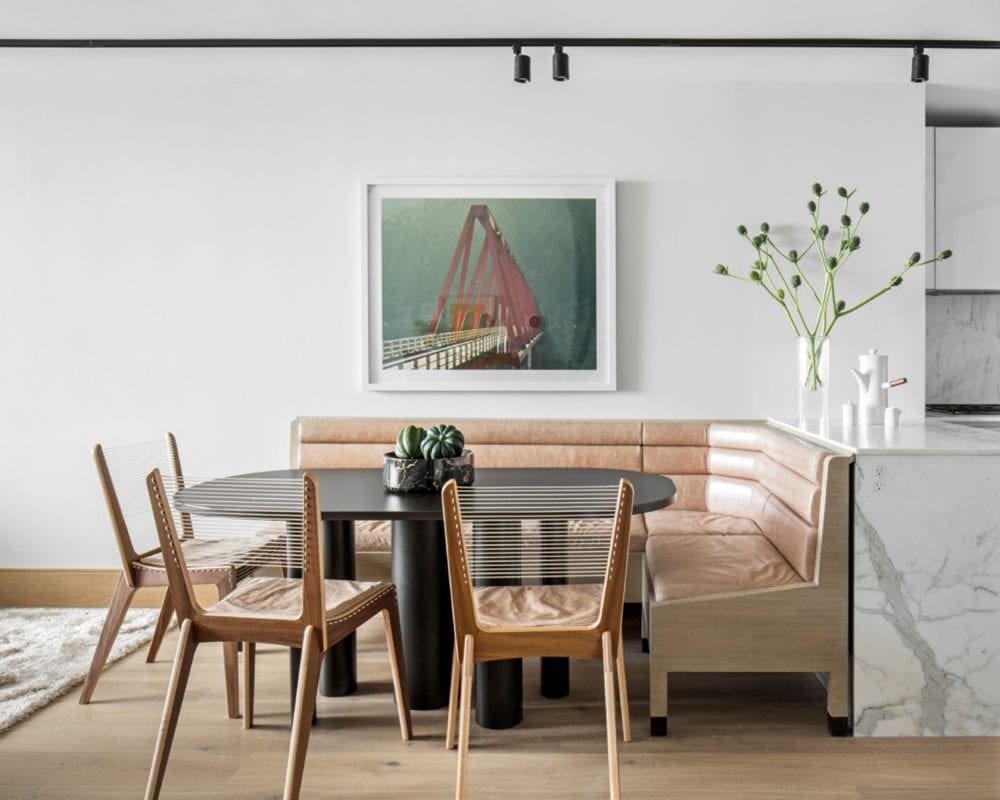 Vinyl: I mean, how rarely have you found a vinyl that you LOVE? Sure, it can absolutely be so functional and simple and therefore not bad, but it doesn’t feel totally right and not something that I’d love.

Vegan leather: Looking for sources and researching about options. If anyone knows anything about this— durability, cost, etc.—please weigh in in the comments.

A textile with pattern: Nope. I don’t really want a busy pattern to hide grossness. I want simplicity and calmness, at least for the base. 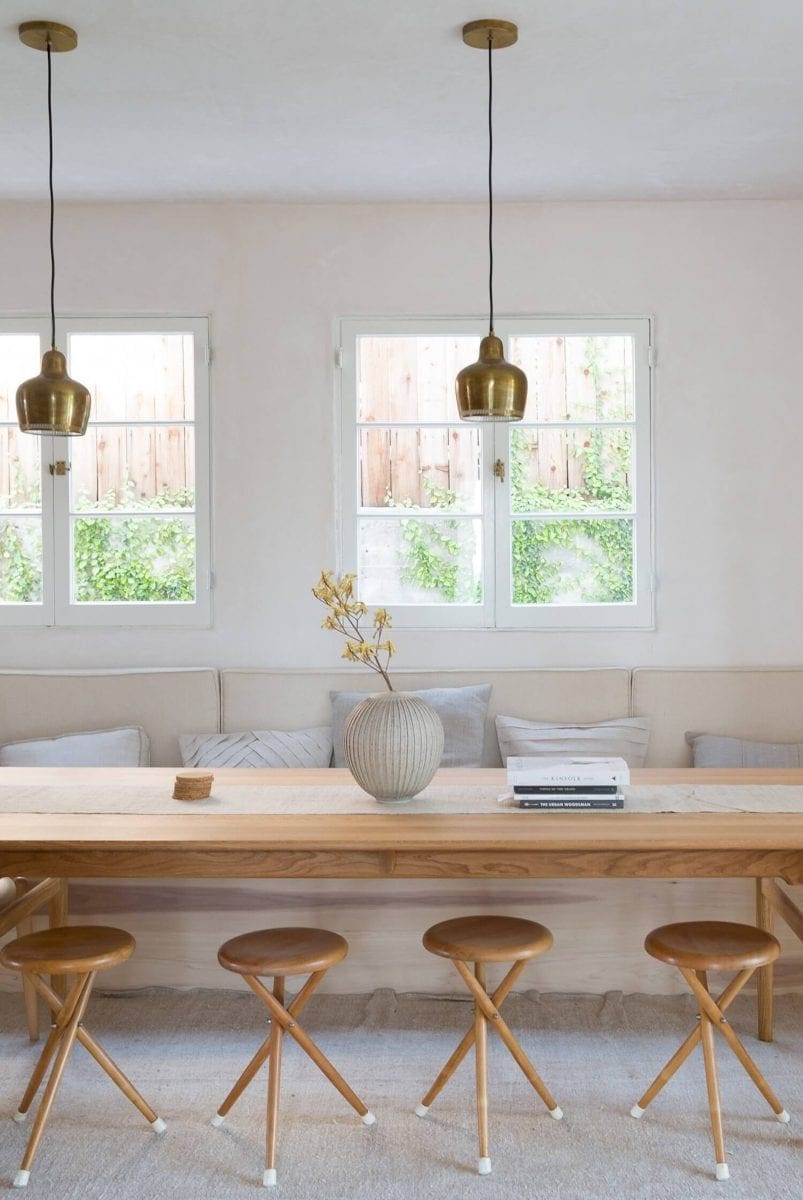 A poly-blend stain resistant fabric like Crypton or others: I have a whole box of Crypton and have even made a few selections that are a medium gray with enough texture to hide a bit. Then we’d do the back pillows in a mixture of lights and mediums whites, grays and blues. 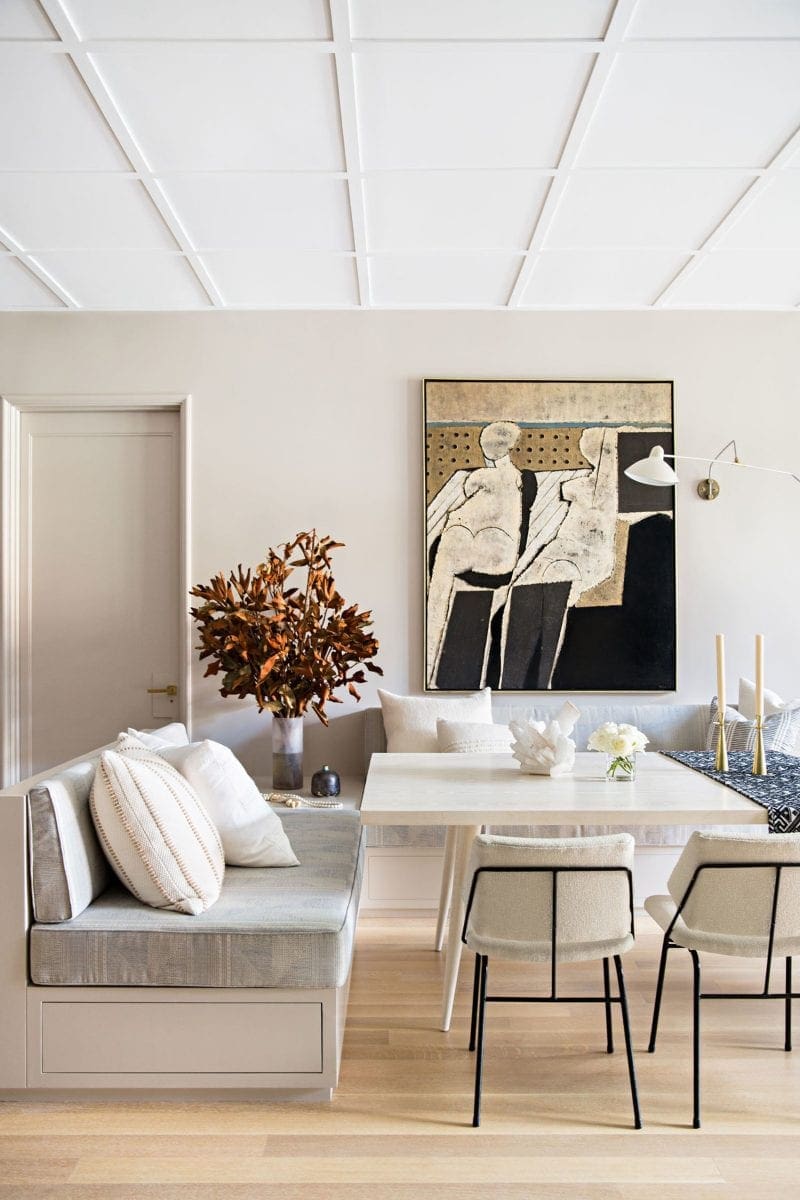 There are just too many ways to skin a cat, especially when you are kind of in a rush. The simplest thing to do is to get the medium toned gray (with texture) stain-resistant fabric that is really pretty and cozy and have a bench seat made without the top seam, out of a cushy foam and feather mix (so it has some give and isn’t that really TIGHT look). Then play with a ton of pillows to see if A. that looks good (or just messy) and B. if it’s comfortable enough. I can alway ADD a back cushion later. Either way, I’d make it washable with a zipper. I’m even debating getting two sets made to have seasonal options and because I’M A CRAZY PERSON.

I’m new to the banquette world. I’ve never had two kids and a banquette before. Am I crazy to not splurge on leather that will be durable at least for the bench? Or is a washable stain-resistant slip covered fabric in a medium tone good enough? And will the pillows annoy me with the necessary daily styling or will they bring me comfort and joy because I actually love styling?

Please weigh-in. We have to at least have the design/style chosen by Thursday before my schedule gets insane for 2 weeks and I think that per usual you guys are full of ideas I haven’t thought of or at least some banquette experience…

This site uses Akismet to reduce spam. Learn how your comment data is processed.