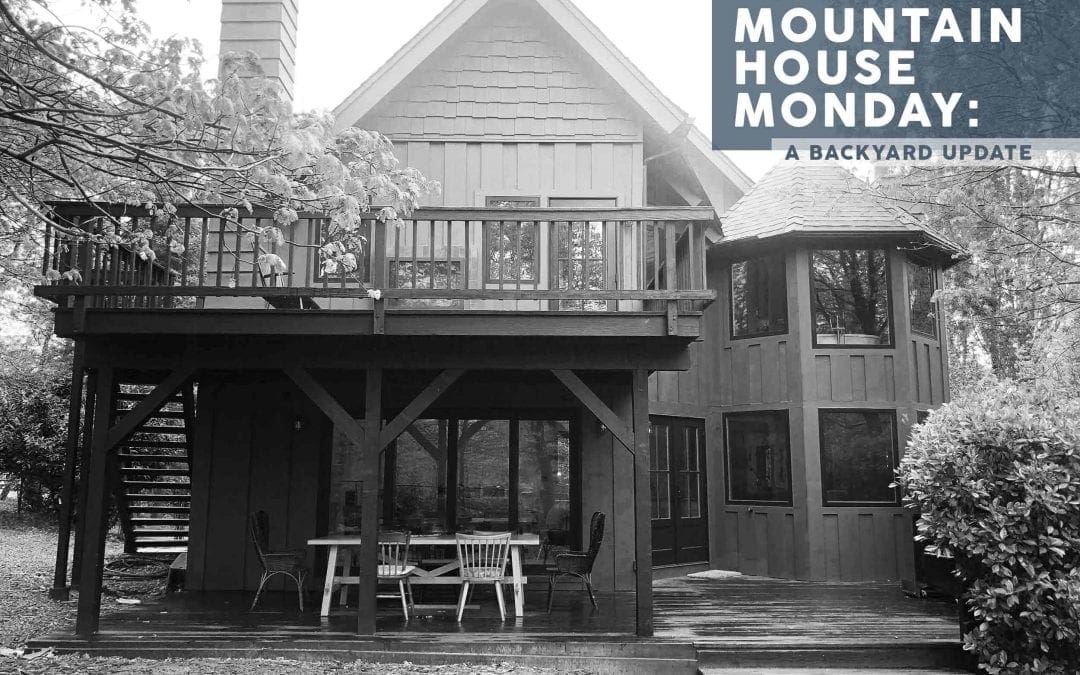 In some not so shocking news, the renovation of the mountain house went over budget…by like five times. Someday, I’ll be ready to talk about it, but right now it’s safe to say that we aren’t splurging on the exterior like we thought we could, at least not yet. The fancy outdoor kitchen with wood-fired pizza oven and dining room pergola with a massive surround deck and masonry will not happen. So today, I’ll update you on what the original intent was and what we are still wanting to do. Plus, I have a few questions for you (regarding turf and hot tub plan – because Brian Henderson refuses to even entertain the thought of ditching the hot tub).

Here is an overhead plan Velinda drew out last summer with what we were originally thinking: 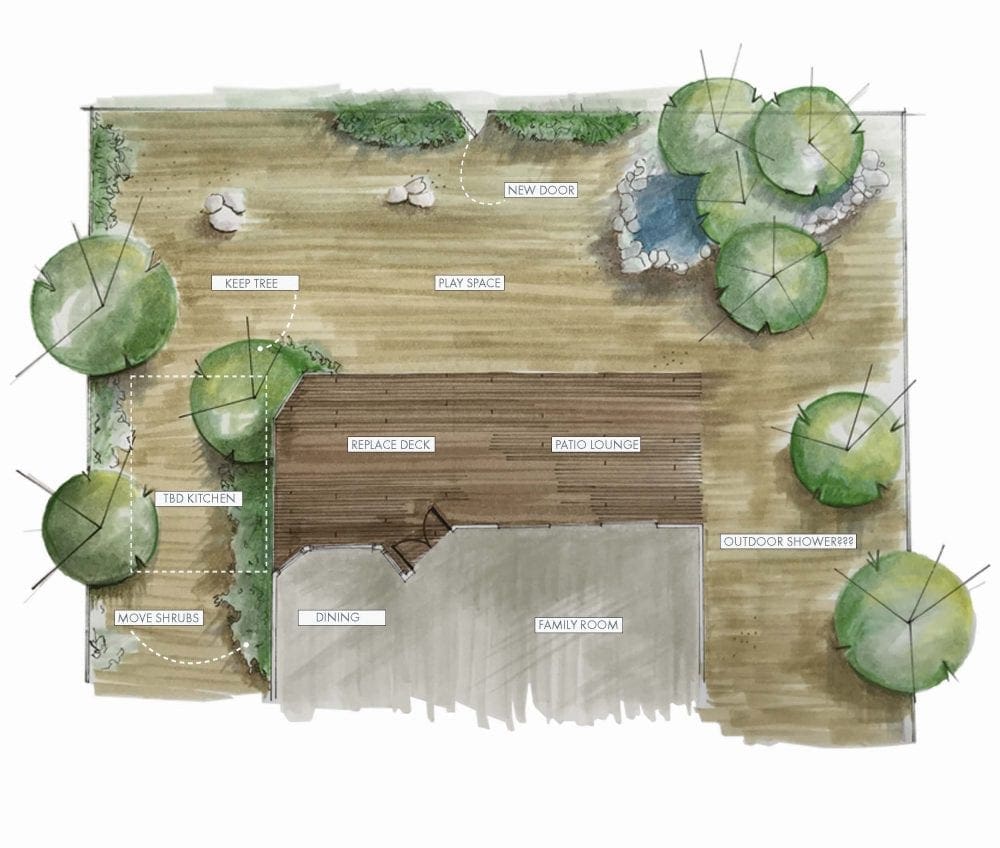 As you can see, the yard is shallow and wide but the lot is actually 1/4 of an acre. It’s just all on the side of the house. It feels so much smaller than it is, especially when you are looking out the new doors because the gate to the back property feels pretty close.

One thing you should know:

The kids have 50 acres of forest to play in outside that gate, beyond the backyard. It’s a family camp that we have access to wander in if we are respectful (and usually it’s empty). There are no bodies of waters or cars so we are getting THIS CLOSE to letting them go on their own with a walkie talkie and the rule that they have to stay together. I think by the time they are five and seven, they’ll be able to do it; they know it like the back of their hands now and it’s basically a dream come true for us as my house that we grew up in also backed up to thousands of acres of government land. THE POINT before you fall asleep: This yard does not need to check every box for them. We don’t need a playhouse or to add more landscaping or greenery for bug hunting. All the fort building and nature hiking will happen back there.

Okay. Originally, we were going to get rid of the big bush (still want to), extend the deck and put a big outdoor kitchen on the other side to open up the space and, well, utilize it. 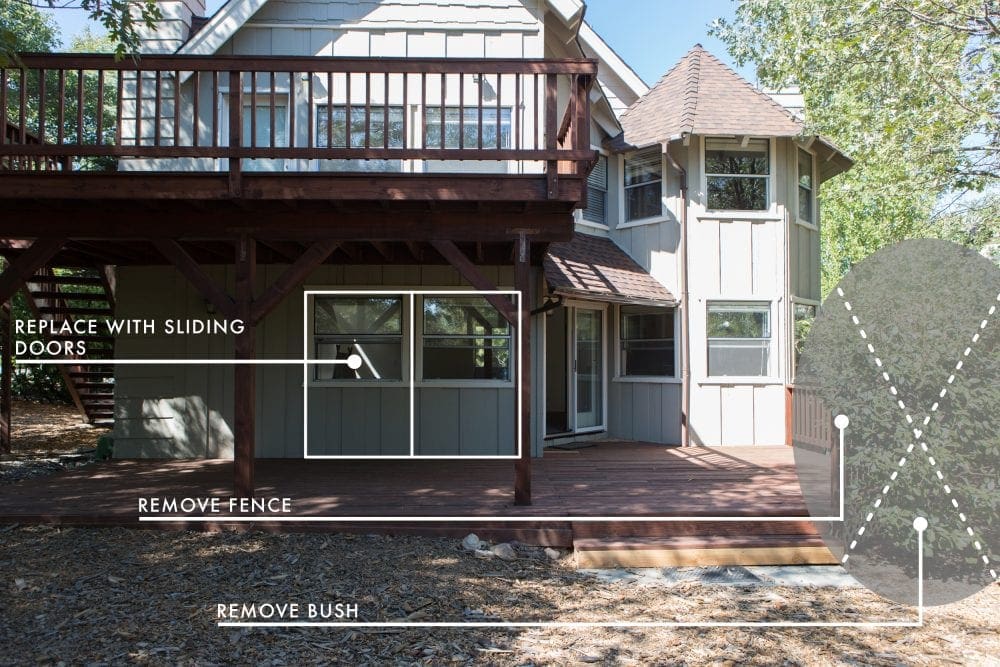 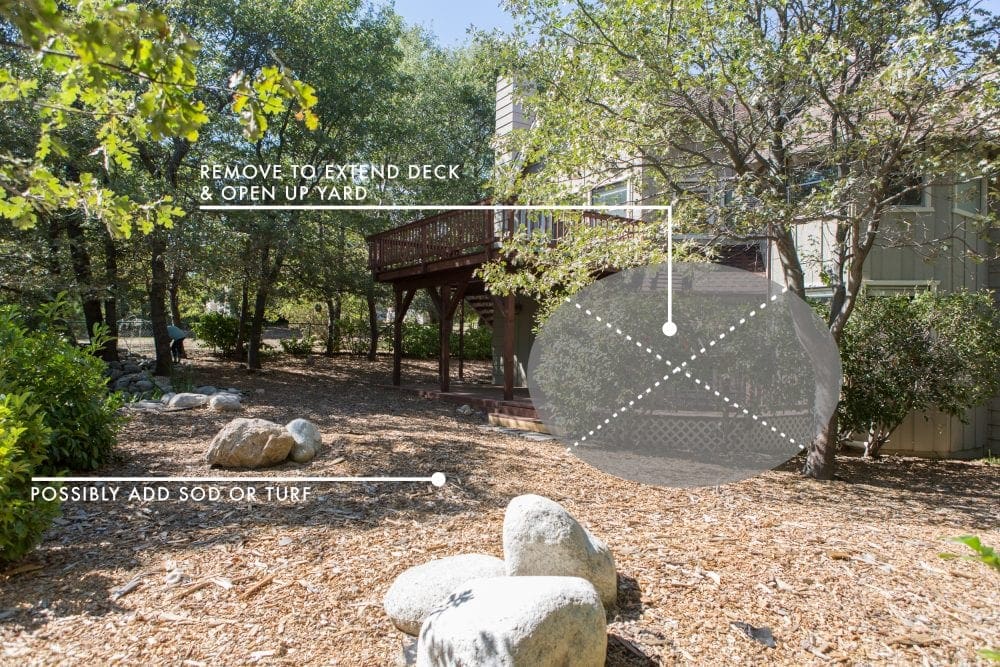 And, of course, we still want a fancy outdoor kitchen but it’s like a $50k expense and it’s not something we can spend right now. Besides, we want to spend the summer up there and see how we actually use the space. What do we really need??? 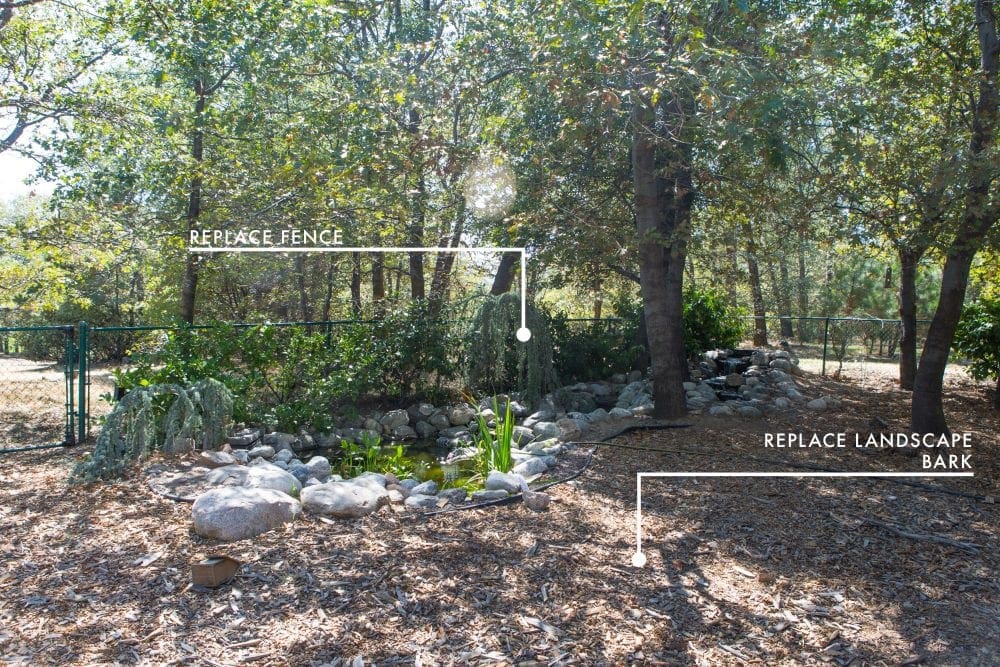 Neither of us like the bark but boy do all of us love that fake stream/pond. It’s huge and so fun for the kids and the sound is just so peaceful even though it’s fake. My dad always built water features at our house and I had no idea that I picked up the obsession but the second that I saw this pond, I was like “this is the house.”

We originally wanted to replace the fence, but I don’t want to replace it with something cheap so once again we are looking at a $10k expense (at least). Thus, we are holding off on that for now, too.

This is the side of the house where we now have French doors coming out the downstairs guest room. 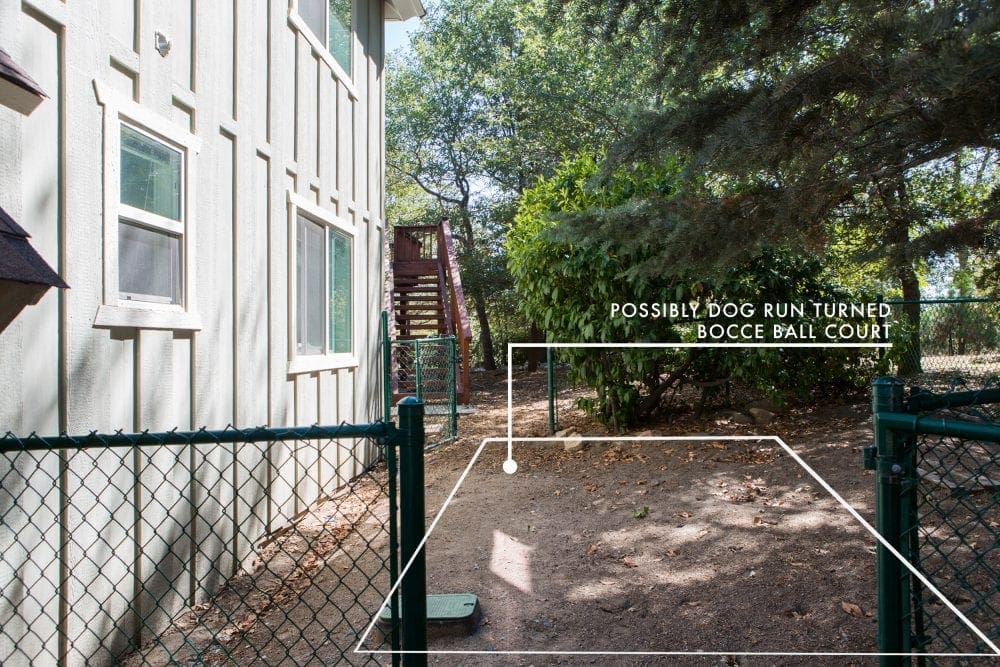 We thought about doing a bocce ball court but now aren’t convinced that people actually use them enough. More importantly, after debating for MONTHS about where to put the potential hot tub, we have realized that this is the best place. It’s totally unused and is a decent amount of square footage that is just sitting there.

But of course it’s not that easy. It’s sloped and you can’t put decking on dirt without pouring some cement (it’ll rot otherwise). So we could put a stone patio and plop a hot tub on top of that but that doesn’t sound too pretty. And not everything has to be pretty in life, but man, to spend $5k on something that is UGLY is a bummer. 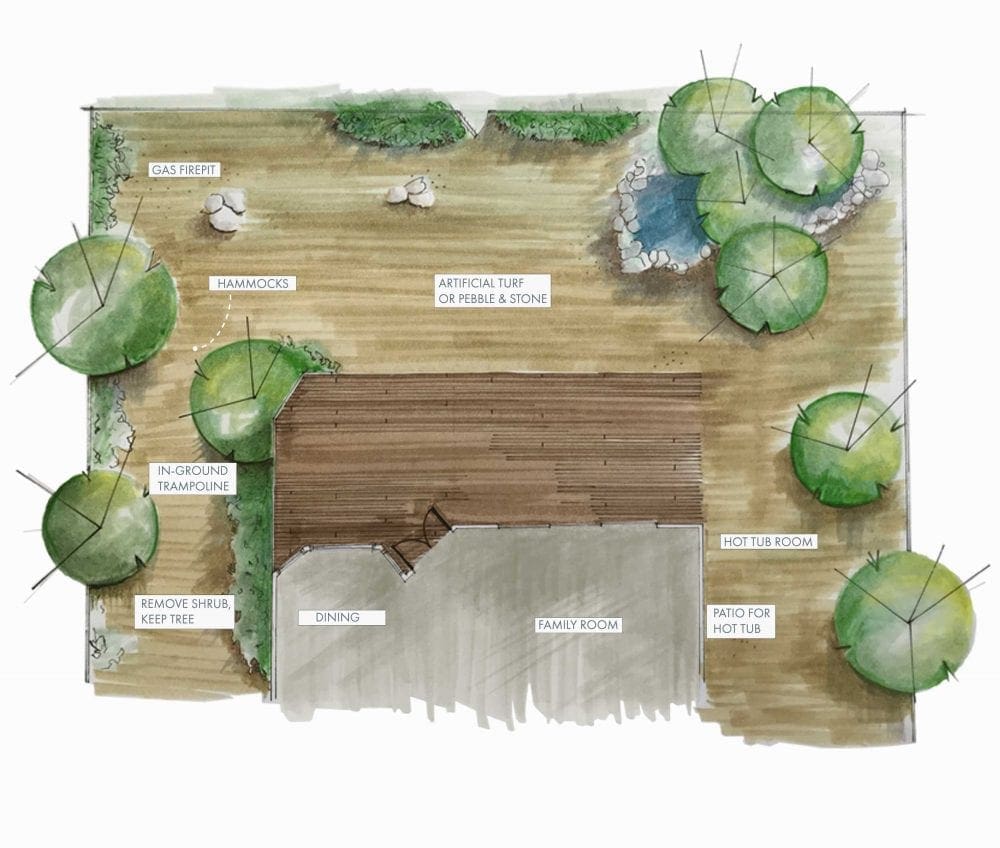 Brian is against the pretty cedar tubs because they aren’t comfortable. He wants a big molded plastic thing. We haven’t started shopping yet, but I can already tell we aren’t on the same page. So that’s going to be fun!!

The main thing we are backing off of is extending the deck (around the tree) and creating a massive outdoor kitchen and dining area. 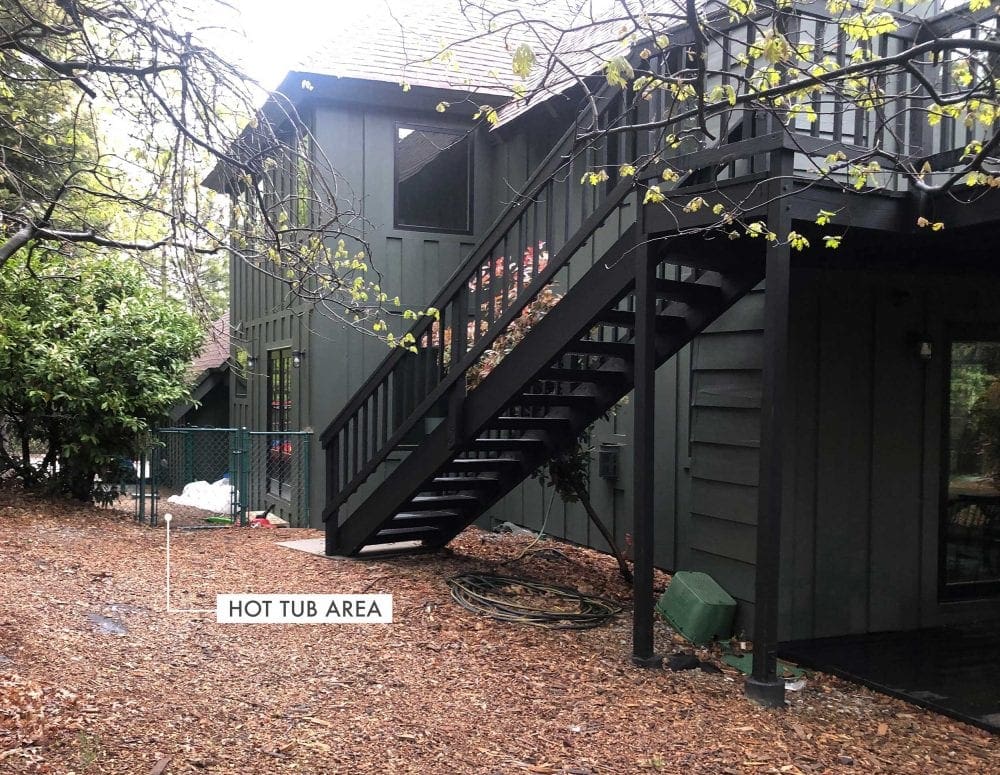 But we WANT to put in a hot tub and create a “room” for it for privacy—not in a tacky way, obviously, but something more like a wood-slatted wall or something chic and pretty. 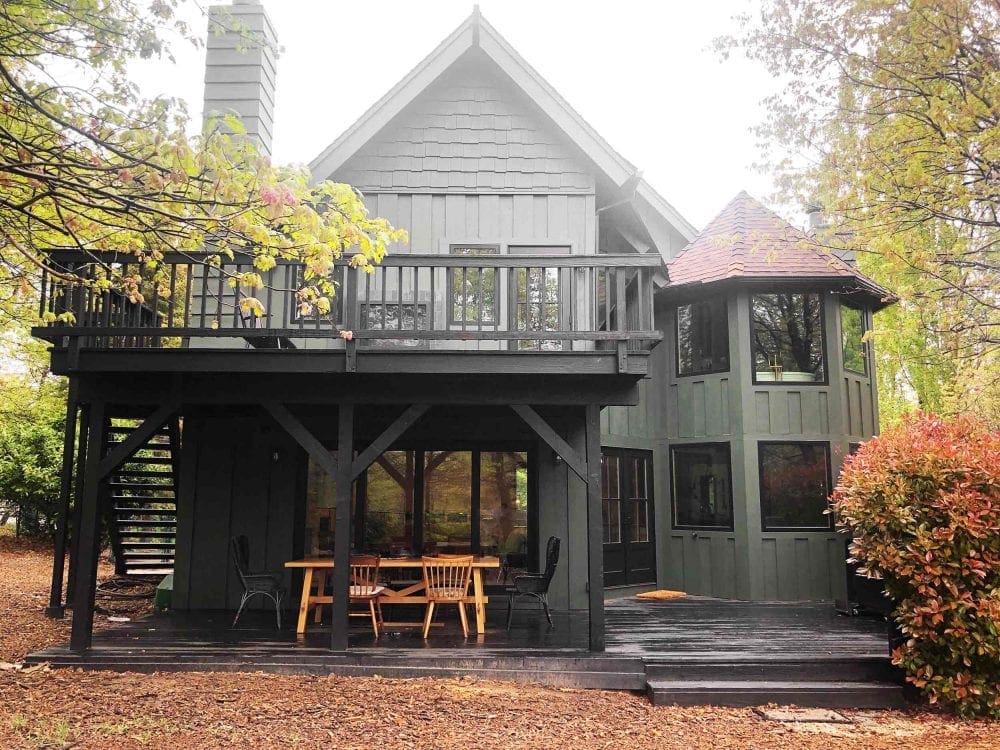 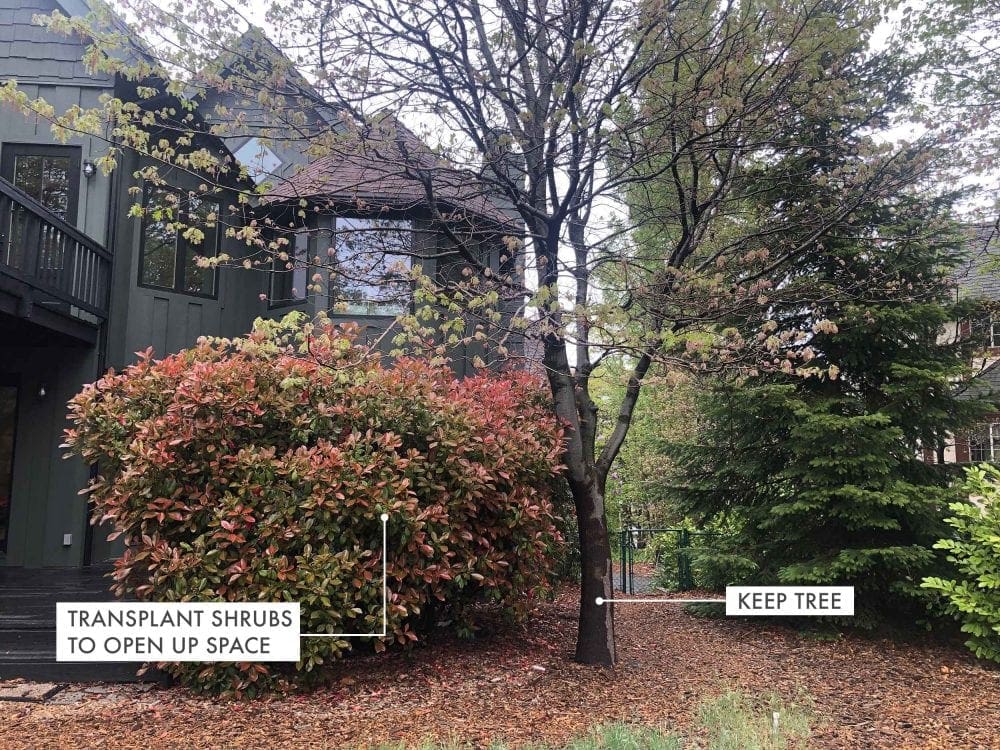 I hate removing any greenery but we don’t use the space on the right side AT ALL because it feels closed off, so by removing the shrubs (and hopefully transplanting them), we can utilize more of the width of the yard. We are toying with an in-ground trampoline but I’d love to know your thoughts on them if you guys have them. I grew up with a trampoline (Mormon, duh) and I’m pretty sure we lived on that thing in the summer. 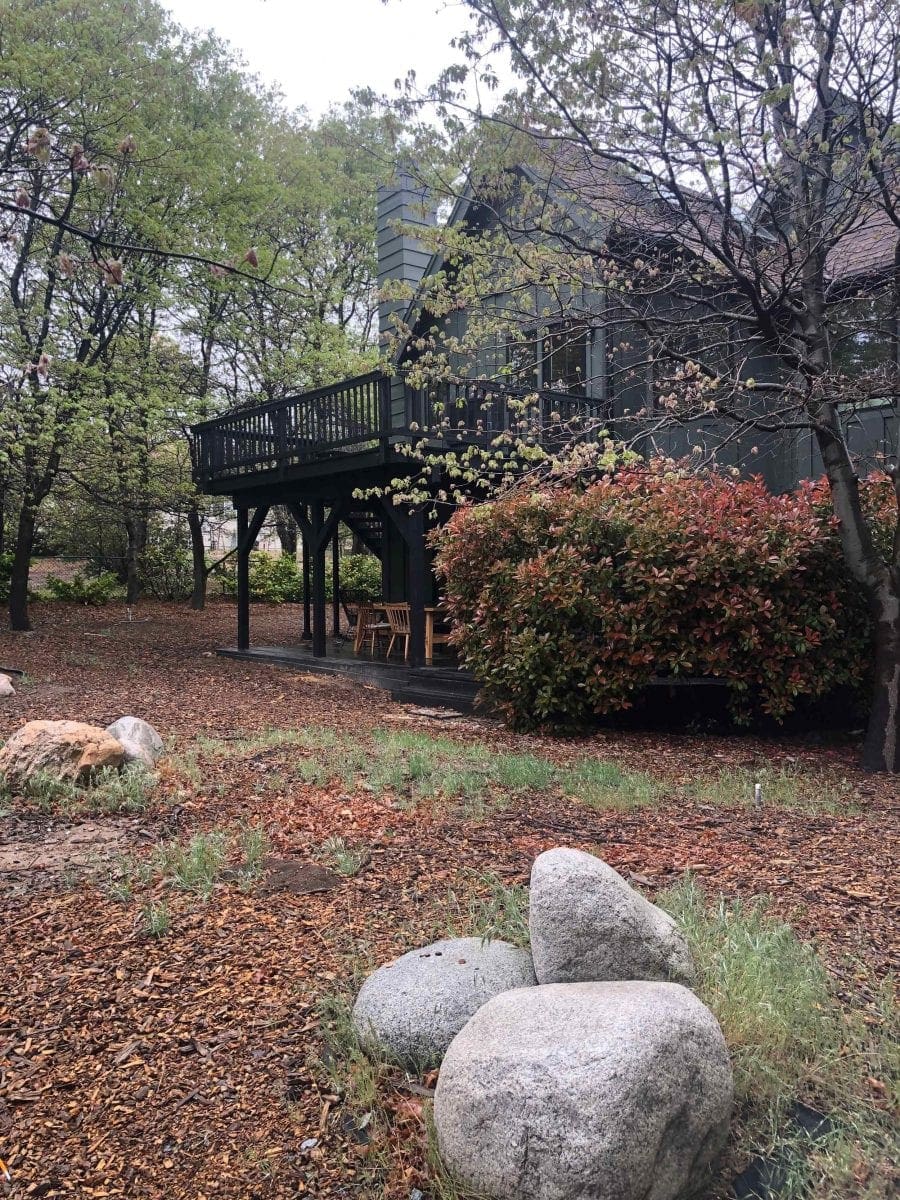 I’m very hesitant to do ANYTHING until we are confident we have the right plan. I don’t want to put down turf or pebbles and then find out that in order to put in the trampoline we have to level the whole thing. I don’t want to plant more shrubs around the perimeter until I know for sure where, say, the potential gas fire pit would go (we can’t have wood firepits up here). 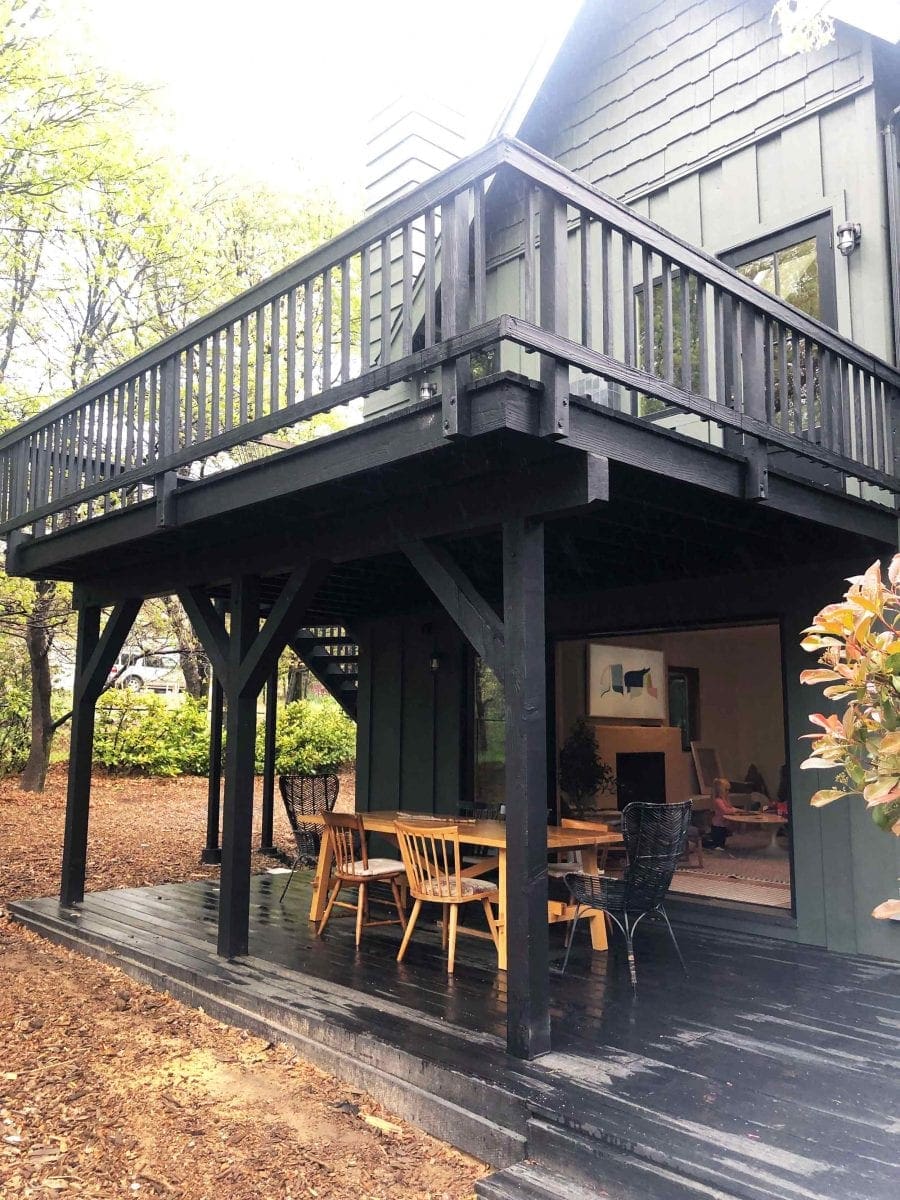 But we are obviously not destitute and there is no RUSH on these things. It was cold up there this weekend but I opened the Marvin scenic doors so you can get a sense of the indoor/outdoor flow. It’s pretty magical. 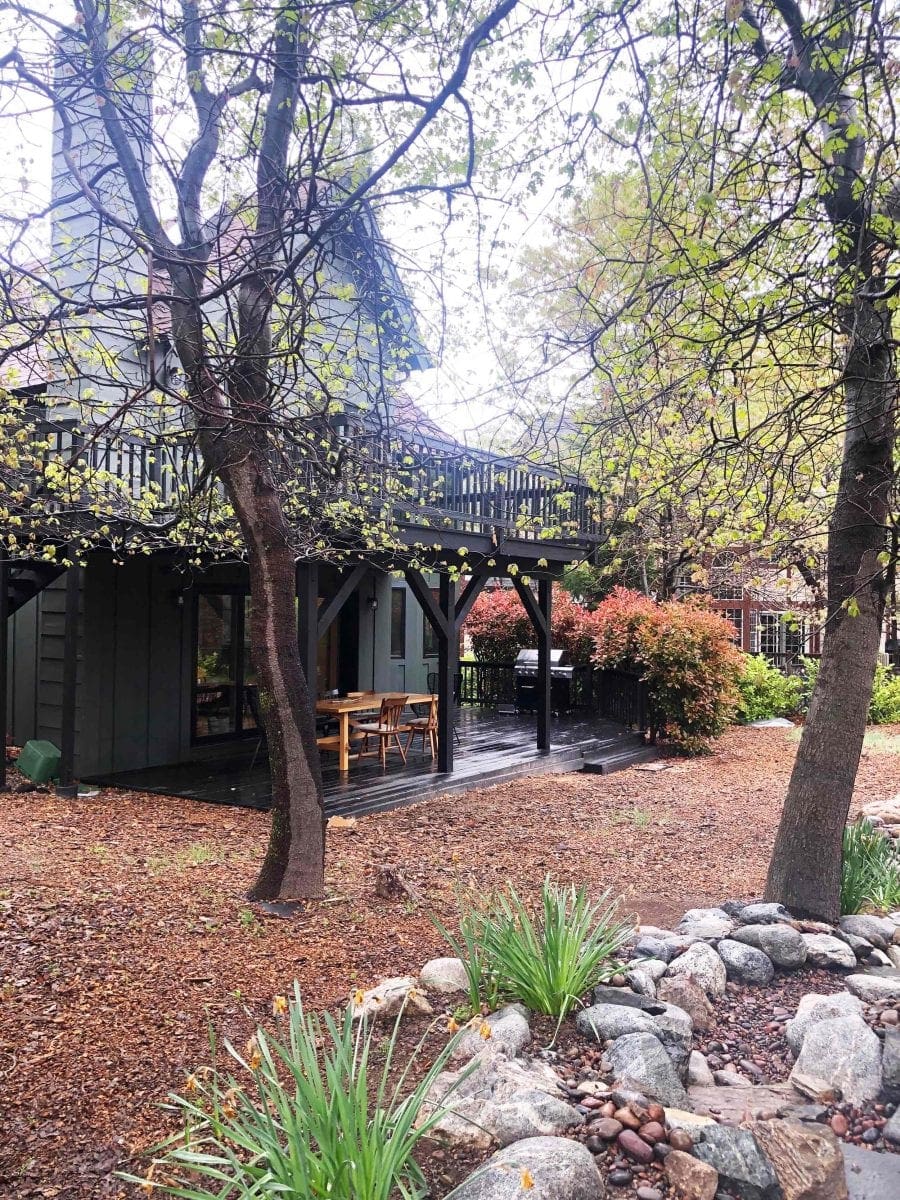 My biggest question, and what Brian and I are debating the most about right now, is turf versus, well…anything else.

OH WE CAN’T PUT IN REAL GRASS. There is a law that was enacted in 2007 I believe that made it illegal to put in real grass due to water consumption. You can have it if you already had it, but you can’t put it in now. So up here, there is a combination of artificial turf or bark/mulch everywhere.

I personally fear that the turf will be jarringly fake, even though I’m not opposed to it in general. When debris falls all over it, it just looks messy and so obviously fake. I know there are good versions of it out there so I’d love your opinion. 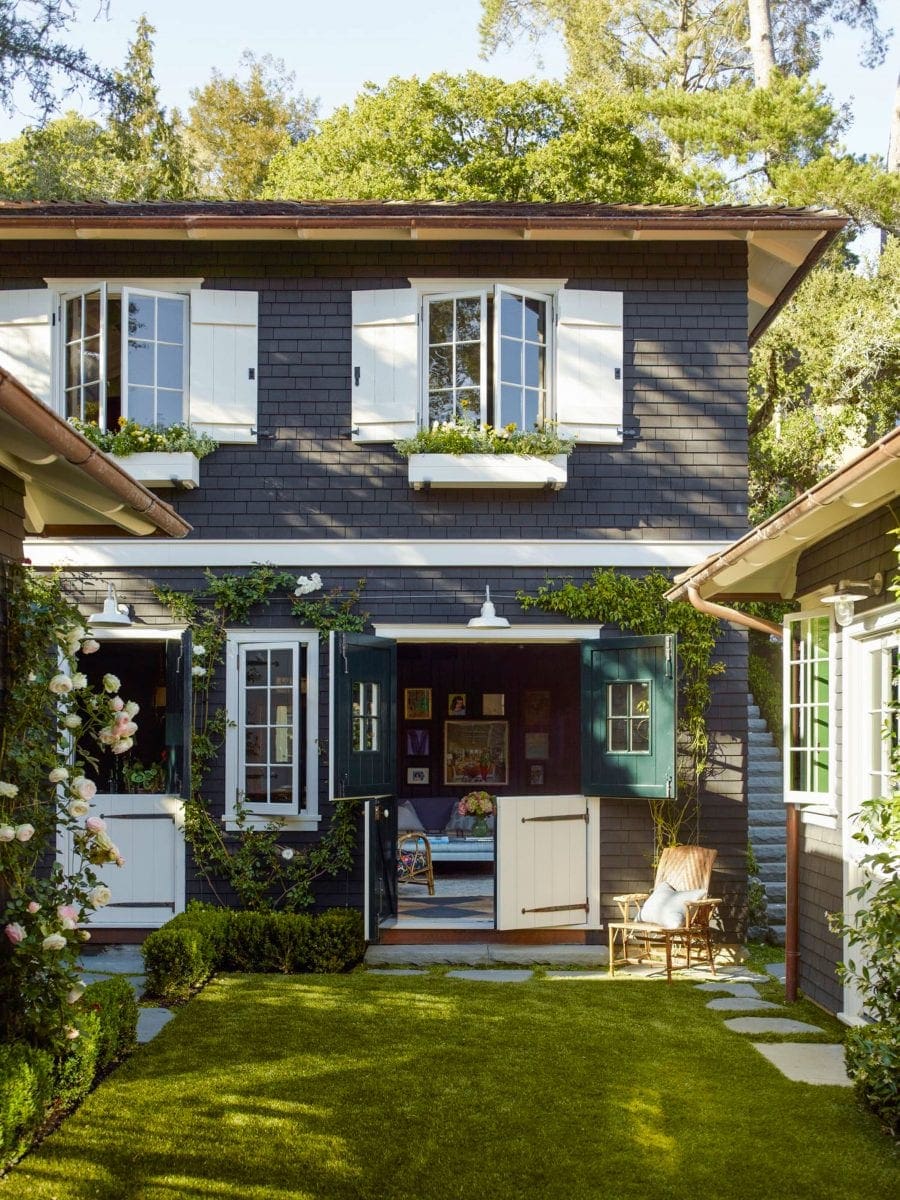 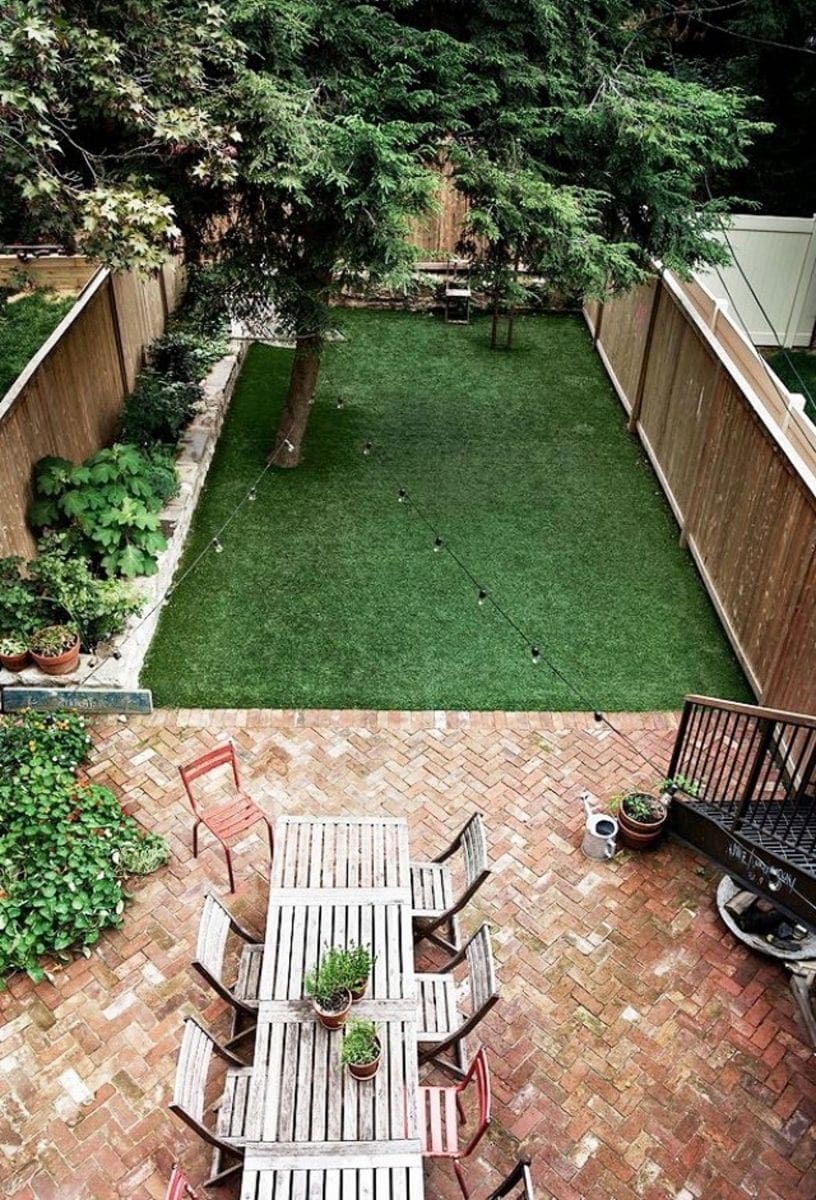 That’s a little too perfect, but at first glance, also pretty good. 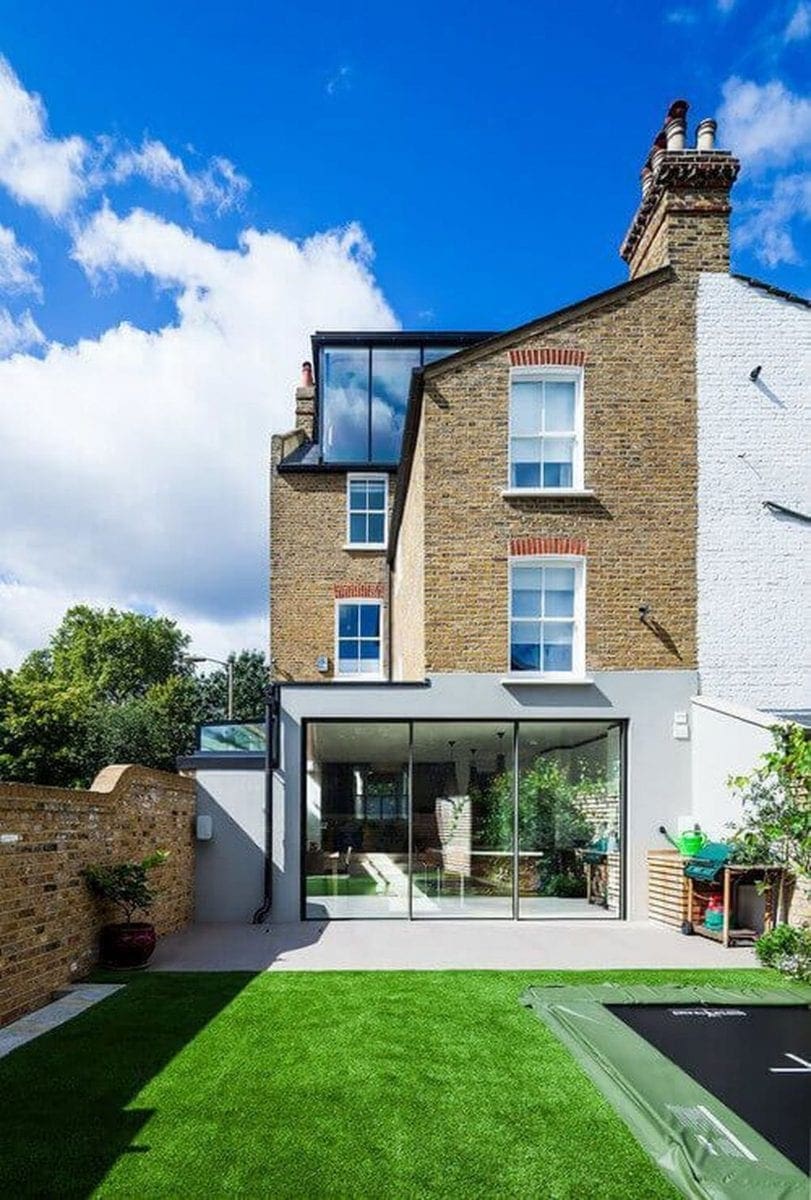 Here is what I’m hoping to convince him of (and I think it’s working): do a combination of pebbles, some stone paths and mulch in areas where there are shrubbery and greenery. 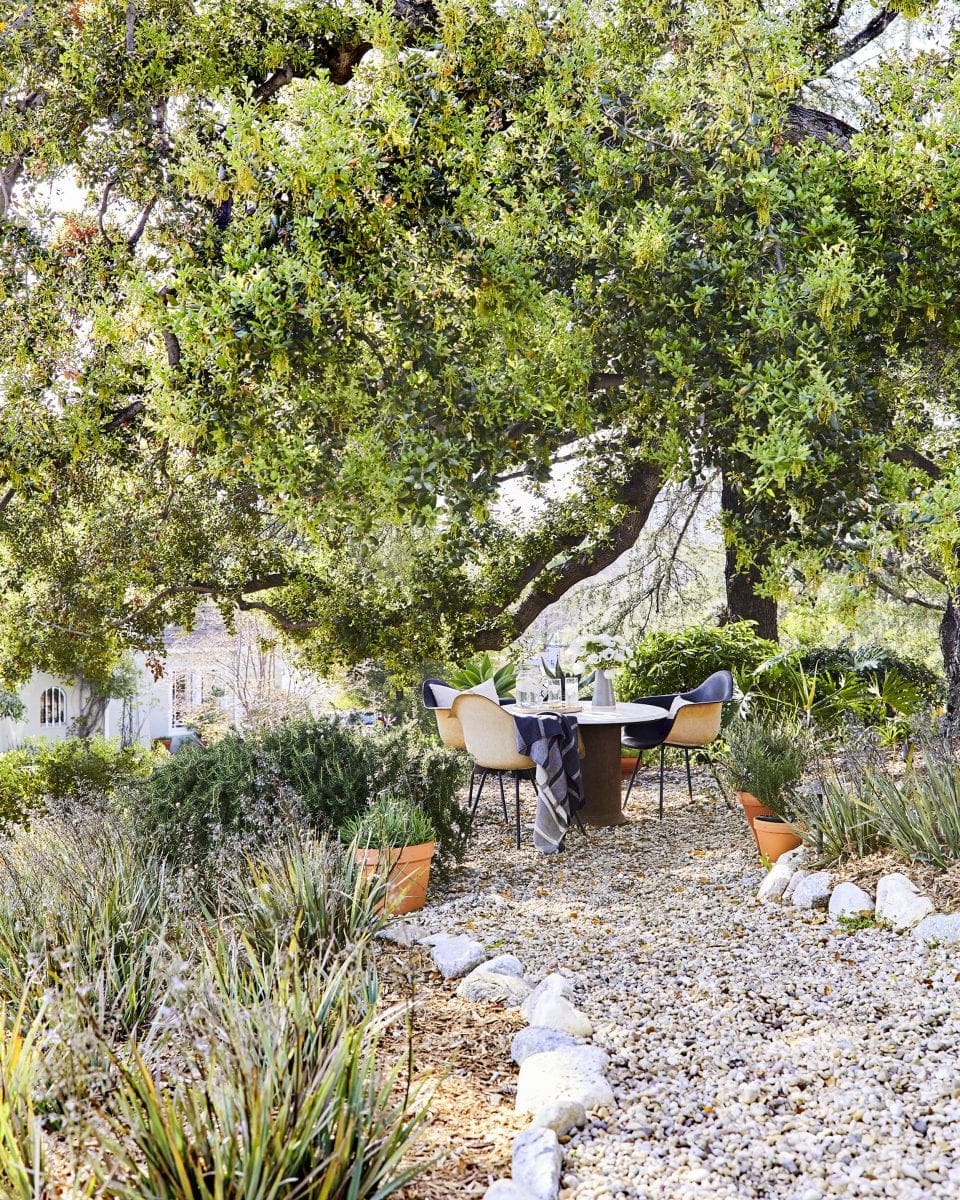 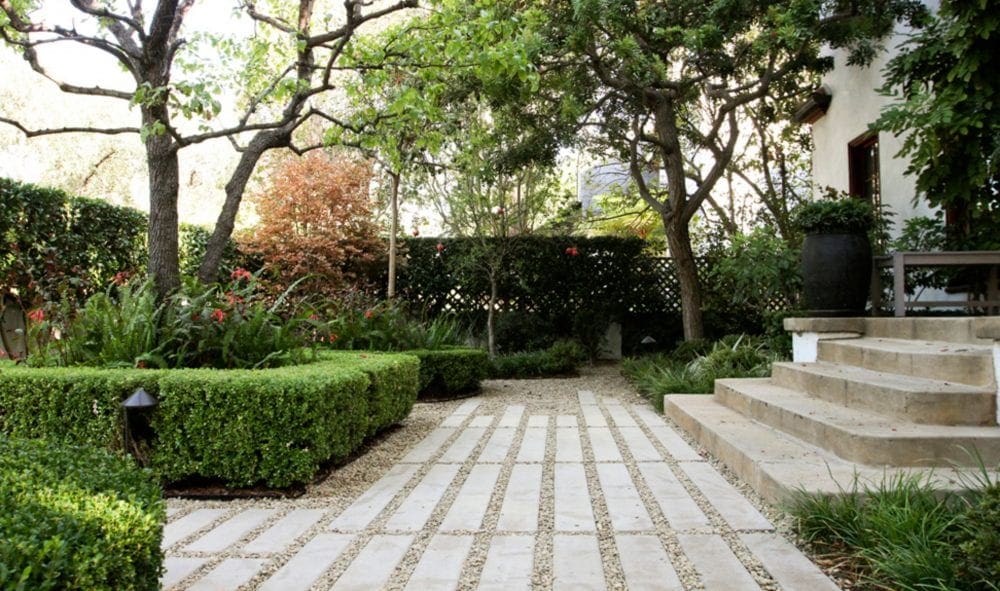 I could go this modern (below) but Brian can’t and admittedly it’s not as warm or inviting. It’s like it’s IMPOSSIBLE for me to be minimal and cold. 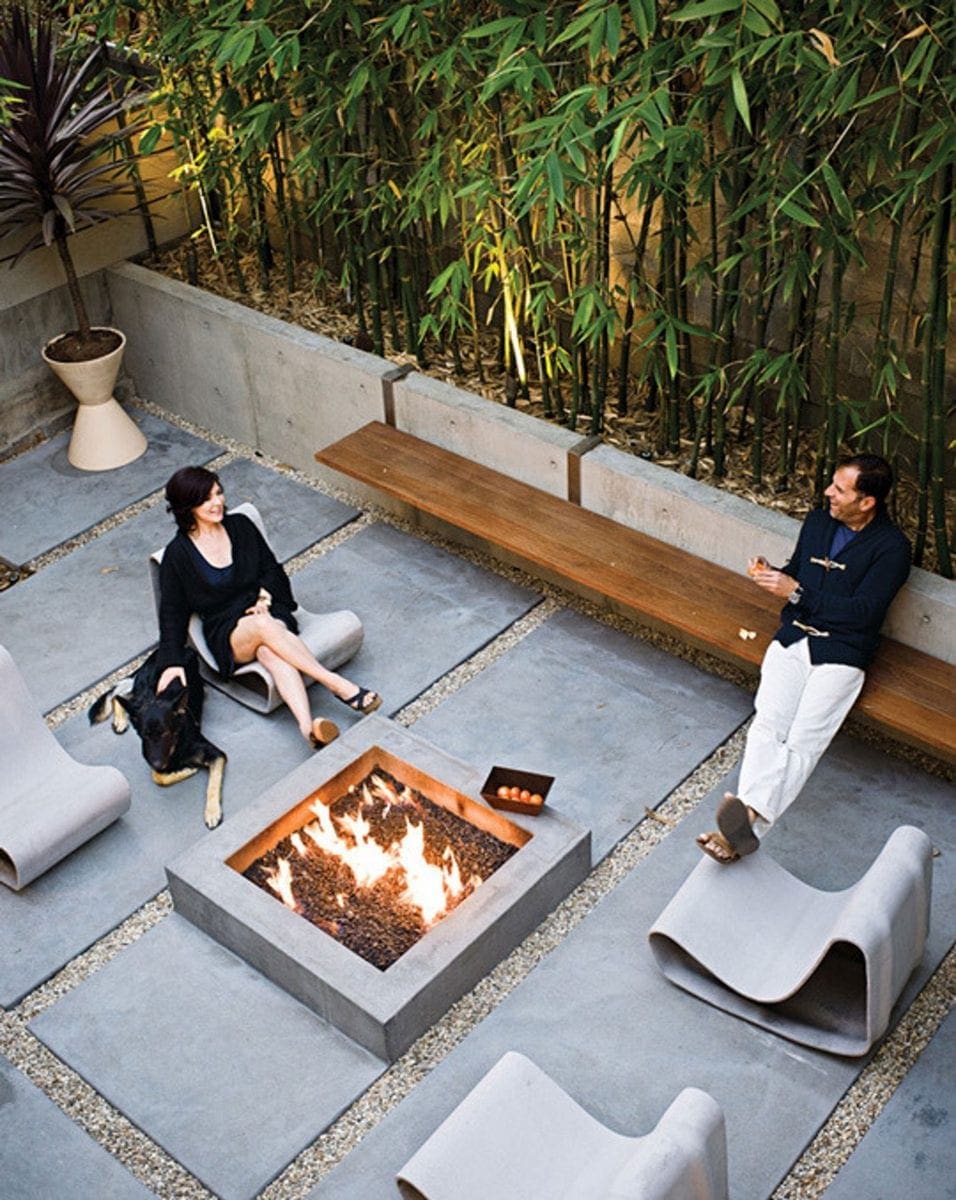 So imagine if this was us, below, and instead of the cement it was pebbles. 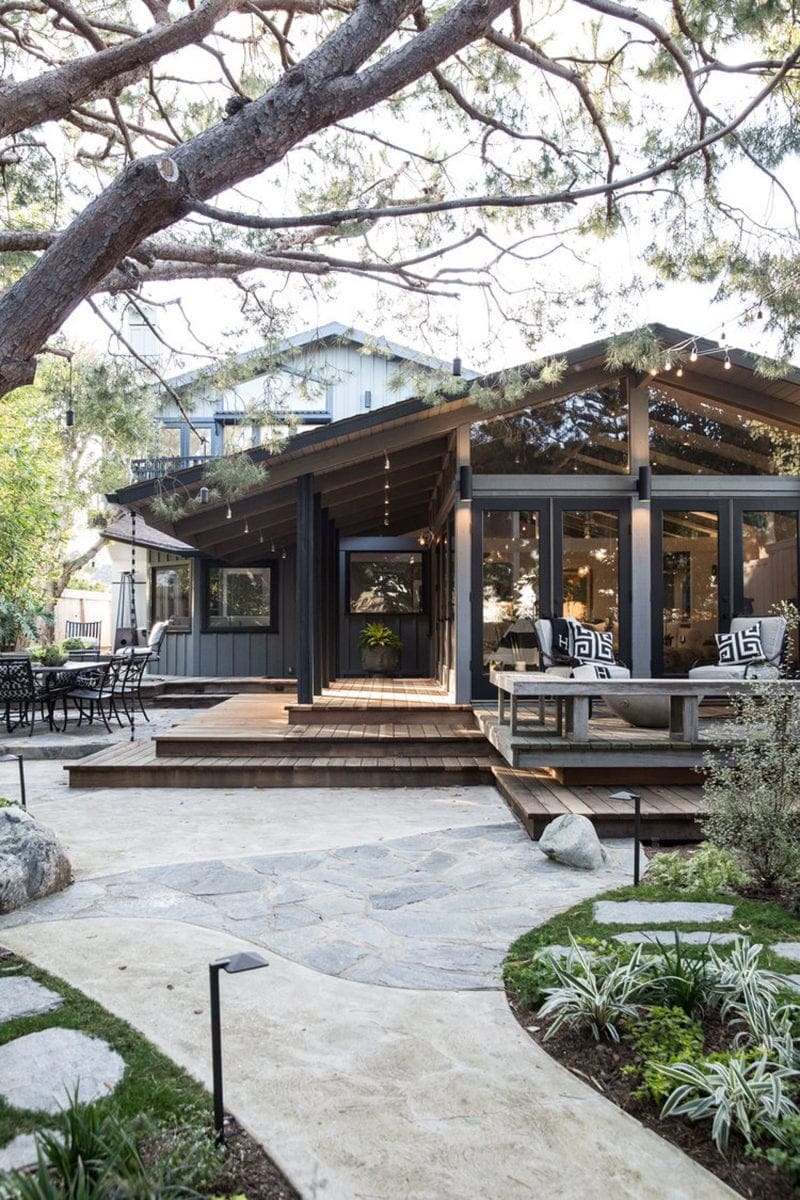 You get a combination of pathways, pebbles, and landscaping. Brian and I just went outside into the backyard (we came up this weekend for Mother’s Day) and we agreed that we could put in one patch of turf somewhere; something just big enough that if we wanted to lay around or picnic, we could. Maybe under the hammock area? And then we also need to relocate the firepit because it’s too close to our neighbors and our friends are too loud, too late to be near them.

So the plan? HA. The plan would be to come up with a plan over the summer as we spend more time up there and really figure out what we need/want and then where could it go. Meanwhile, we save for the execution of it. I know that I have to create some outdoor patio spaces for work by next spring so I suppose we’d like to start any sort of changes in the fall so we are ready for those photo shoots but I just want to enjoy NO CONSTRUCTION for the summer.

But I’d LOVE your thoughts on artificial turf versus hardscaping and if anyone knows of a nice looking purchasable hot tub so we can avoid doing something site-specific (and therefore custom and expensive) that would be lovely. I guess just any experience would be helpful, so please, please chime in in the comments. xx

This site uses Akismet to reduce spam. Learn how your comment data is processed.

You can find out more about which cookies we are using or switch them off in settings.

This website uses cookies so that we can provide you with the best user experience possible. Cookie information is stored in your browser and performs functions such as recognising you when you return to our website and helping our team to understand which sections of the website you find most interesting and useful.

Strictly Necessary Cookie should be enabled at all times so that we can save your preferences for cookie settings.

If you disable this cookie, we will not be able to save your preferences. This means that every time you visit this website you will need to enable or disable cookies again.

This website uses Google Analytics to collect anonymous information such as the number of visitors to the site, and the most popular pages.

Please enable Strictly Necessary Cookies first so that we can save your preferences!